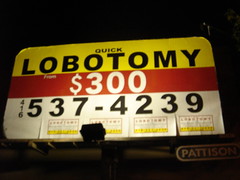 A woman carries out a speed dating experiment. She goes to one such event as a human rights lawyer, interested in economics, politics and Proust. She strikes out: the men are terrified. She goes to a second night as a ditzy, brain dead florist who says things like “why is water wet?” The men love her.

The conclusion? According to Tanya Gold, the dating guinea pig in question, men are much more interested in stupid women:

Everything my mother has ever told me about men is true. They didn’t care that the florist couldn’t recognise a chair. They liked it. The feminist revolution didn’t pierce their hearts; it only made it into human resources. If you want to be loved, just scoop out your brain and act like a child. After 40 years of feminism we shouldn’t really burn our bras. We should burn our men. Love may be dissembled but statistics never lie. Reader, let me tell you: men want me – and you – to be lobotomised.

This was posted on Comment is Free, so as usual the comments are ‘interesting’. I only read the first few, but the second commenter comes out with this zinger:

To find an attractive woman who can converse Heidegger, politics, economics, ie might actually want to? I’ve met two in my life!

Very small social circle, or sexist pig who thinks he’s only met two intelligent and attractive women in his life-time? You decide.

In other news, Ads of the World has posted a suitably disturbing image from a German campaign against sexual abuse of children.

Maia at Alas, a blog points out that the new leader of the African National Congress is very probably a rapist. The ANC has been voted in at every election since proper democracy was established in South Africa in 1994.

Talking of corrupt politicians, AlterNet reposts a Daily Kos item on the ‘Top 10 Moments in Mike Huckabee’s Extremism’. For those who haven’t been following, Mike Huckabee is a thoroughly detestable candidate for the US presidency, who is somehow being taken seriously.

Black Women in Europe alerts us to a screening of Sisters in Law in London on 12 January, a film about female judges in Cameroon. I saw this documentary a while back at the ICA, and can heartily recommend it.

Talking of films, Jasmyne Cannick has posted up a trailer of her new video project.

Feminist Philosophers reminds us of the link between exercise and mental function, although I’m really linking to this because JJ also posted up some mindboggling footage of cats using an exercise wheel, seemingly without any sort of velcro or straps to make them do it.

I normally file anything from Men’s News Daily under the mental catagory ‘rabid misogynists it’s not worth taking the time to post about’, but I couldn’t resist this item, in which one of their columnists responds to a woman who wrote in to say:

When I was in college, I took a course entitled ‘Feminism and Philosophy.’ It was many years ago so I can’t recall what specifically was taught, but since I am an idealist who believes in equal opportunities and rights for all people, I labeled myself as a feminist. I did nothing else to support this cause and I certainly did not advocate discrimination against men.

Fast forward 18 years to now. My husband has begun reading your website and others and is educating himself on male discrimination. He is extremely angry at me because ‘my cause’ caused all these problems for men and I ‘supported’ it. He has been educating me on male discrimination and it is opening my eyes. I no longer wear the label ‘feminist’ but my personal beliefs and hopes for equality for ALL people have not changed. My problem is that my husband’s anger is overwhelming and he refuses to acknowledge that I really can see how men are actively discriminated against. I have read a lot of your site. My question for you is, what do you think I can do to show my husband that I do see many of the problems men are facing, and that I advocate fair treatment for all people male/female/white/black/all religions, etc? Please help!!!

This feminist’s response? Dump the idiot.

The ‘men’s rights’ response? Actually not that different. Of course, Glenn Sacks doesn’t actually advocate immediate divorce, but does concede this is “extremely unfair”. His reasoning is priceless:

1) When you were a feminist in college in the 1980s, it was not an unreasonable thing to do. The feminist movement had legitimate grievances, and many college students of that era, including myself, were sympathetic.

Whereas now, it’s totally unreasonable male-oppression to be a feminist.

Well, who’d have thunk it? Feminism isn’t entirely responsible for all the ills in the world. It was only a contributing factor.

The comments are even funnier, as the misogynists who read the site respond to this concession to the crazy concept that women and men are equal and should be treated equally. One even compares being a feminist in the 1980s to belonging to Hitler youth.

Photo by caramel377, shared under a Creative Commons license