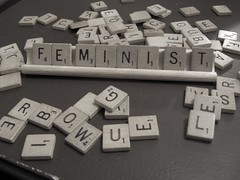 Is the new Beowulf film sexist? Revena at the Hathor Legacy thinks not, and she has an interesting perspective on why:

Don’t get me wrong – the bulk of the characters in the film are pretty damn sexist. There’s much cheerful talk of despoiling virgins, etc., and the female character with the most face time (Wealthow, capably voiced by Robin Wright Penn) is explicitly equated with an object by her husband(s).

But even as Hrothgar is likening his wife to his treasured golden drinking-horn, the film itself is making it clear that Wealthow is not an object. The camera follows her, focusing alternately on her face and the action around her, making her the audience’s guide into the film. We see (and share) her emotions. She’s extremely sympathetic, and as fully fleshed-out as any of the other supporting players in Beowulf’s story.

PunkAssBlog dissects some research that shows that even when female leaders excel, the people they led tend to perceive themselves as worse off. Scary stuff.

Victoria Secret workers are paid four cents to sew each bra, a task they must complete in 3.3 minutes, notes Dollymix:

It seems we can’t set foot onto the high street without hearing stories of worker exploitation but you can’t really buy your pants from a charity shop can you?

Our Body Our Blog has interviewed US presidential candidate Hilary Clinton on her healthcare policies. Will she promise to vanquish all those that seek to control women’s bodies? I haven’t listened myself, so you will have to hear for yourself!

Bit late with this one, but the Carnival of Radical Feminists is up at One Salford Feminist.

I wish I had the energy to post about these two stories more fully, but for the moment I will just note The Guardian’s presentation of this story about family campaigners agrieved at the idea that 12 year olds may access the morning after pill without their parents being told, and this excellent column by Polly Toynbee on the poor state of sex ed.

Here, Wendy at Green Girls Global takes a break from posting about environmental matters, to consider the use of the term penetration.

And, finally, the Daily Mail – oh the ironies – posts a selection of sexist ads from the beginning of the 20th century.

Photo by acoustic_punk_sound, shared under a Creative Commons license