Worth more than a thousand 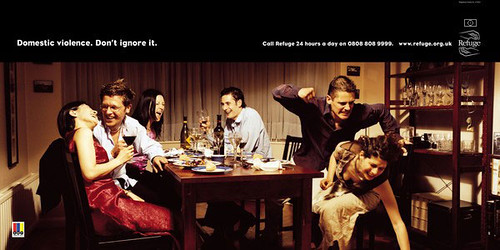 In Jess’ round-up yesterday she included a link to the Daily Mail’s piece on sexist ads.

Please can I draw your attention to the third picture which suggests that a wife deserves corporal punishment if she gets it wrong with the coffee:

The ad is from 1952 which, it’s true, was awhile ago. Unfortunately there are still plenty of ads that promote violence against women, don’t let the Mail’s framing its piece as a ‘retrospective’ fool you.

I’ve written about this over on the 16 Days blog on openDemocracy in a post about how advertising can actually be used as a force for good:

Dr. Scott A. Lukas makes a similar claim on his Gender Ads.com website where he has collected many examples of ads that use violence against women as part of his study of advertising and gender.

In a related piece, I look at feminist activist art projects:

There are a number of projects around the world that are taking on the challenge of reclaiming survivors’ sense of power and some of the most poignant are the most effective for a very important reason: their presence disrupts the silence around violence against women in the public eye. How? They are visual and they are visible.

There’s also a bit about the Gulabi Gang (meaning Pink Gang, it is a vigilante group of several hundred Indian women dressed in pink saris) in that one.

My main interest in both pieces was to examine the power of the visual in normalizing ideas about gender and violence on the one hand, and disrupting those ideas on the other. The piece on advertising for example examines how advertizing campaigns can be actively used by governments to change public opinions. The one on art meanwhile explores how women can reclaim a sense of power/empowerment through the process of creating.

Top photo by ahhhhmen, second photo by Miss Cellania, both shared under a Creative Commons license