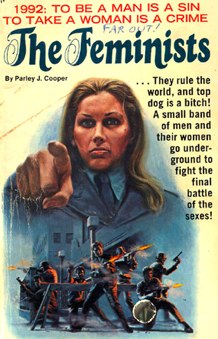 Back in 1971, Parley J Cooper was busy penning a pulp novel set in the far off world of 1992 which he imagined would be dominated by evil feminists.

It’s the story of cubicle drone Keith Montalvo, who has been caught consensually slipping the pink torpedo to a female co-worker. Unfortunately, it’s 1992 and the Big-Sisterish “Committee” has outlawed all unauthorized heterosex, and his crime is punishable by death. Peek below for the cover in its full, unexpurgated glory.

Keith flees underground, literally and figuratively, where he meets Angela, a boot-wearing resistance fighter hottie. Luckily for Keith, while women on the outside reject all males, Angela and other female members of the Subterraneans resistance movement are “attached to the men with arm-clinging closeness.” Soon he and Angela are working (arm-in-arm, of course) to assassinate the President, and reclaim gender supremacy for men.

Fast forward to 2008, and Diablo Cody, the director of the wonderful film Juno, is being asked on national TV “when I plan to be a normal woman and have children!”. Check out her blog for more info (warning: it’s on MySpace).

The only good news I’ve seen today is that one woman has managed to secure £200,000 in compensation from her ex boss who told her she would be “useless” and “never the same again” after she got pregnant.