A senior doctor in Scotland has called for sex education at school to start much earlier, reports the Scotland on Sunday. Cara at The Curvature dissects the hysterical response to the suggestion, and the way it has been interpreted/presented as giving “sex lessons” to five year olds.

TOKYOMANGO links to a new type of stock figurine (although it’s all in Japanese, I think the point is for companies to use them as the building blocks for their own character designs), designed to do “pose like a girly girl”, as she puts it. Check out the difference: 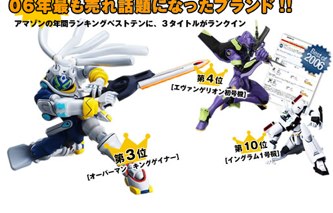 In last week’s Observer, Barbara Ellen interviewed Laura Linney about her career as an actor. Despite the odd annoying touch (at one point Ellen describes female actors that have paid their dues on the stage before going to Hollywood as “thoroughbreds”), the article gets in some good quotes about the way the industry treats older actresses:

Coming from the theatre, how does she feel about the general quality of female roles in movies? Linney’s ‘fake wife’ opposite Jim Carrey in The Truman Show was, ironically, more textured and ‘real’ than a lot of the wives/girlfriend roles Hollywood throws up. Linney is silent for a long beat. ‘It is a little empty,’ she says eventually. ‘Not to mention a waste of a great resource.’

Linney feels that Hollywood has always been hard on women. ‘And it will continue to be hard on women. How much they choose to participate is a whole other issue.’

Meanwhile, Cinematical reports that the brilliant film Juno is doing well: perhaps smart, interesting roles for women aren’t such a box office death-wish after all?

While interviewing Gameinatrix aka Cori Roberts of Gamer Girls Radio, for an upcoming article on Gaming Today, we touched some interesting topics in our side conversations such as sexist beliefs that are still very common in the video game industry. She told us about the remarks made by a senior VP of Marketing from a major game developer who stated, “Women don’t really play anything but The Sims”.

But Mighty Ponygirl at FG has some additional analysis of the comments the post got on Digg.

The first ever Pro Choice Carnival is up at Abortion is a Woman’s Right.

The Guardian reports that it takes women 16 years to pay off their student loans on average, compared to 11 years for men.