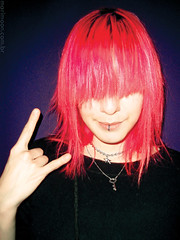 While Angela Epstein sheepishly recognises that what she calls “my

latent male chauvinism” is not a good thing, she is unapologetic.

With a female pilot at the helm, my husband immediately

made some comment about women drivers before returning to his

I, on the other hand, felt uncomfortable and found it hard to relax

for the rest of the flight. All I could think about was this young

woman – well, she sounded young – cradling 200 lives in the palm of

Could it be that Mrs Clinton’s mannish trouser suits and

– and what heterosexual woman wants fake machismo in

Sarkozy’s tough take on social reform (along with his

ability to bag a former supermodel) reeks of the kind of

brought up by this pair, of course!):

My chauvinistic feelings may be sourced in the fact

that every girl inherits the princess gene which dictates her

desire for a strong male role model to cosset and comfort

brothers or her daddy when a dog barks at her in the park. She trusts

them more than me to protect her.

Although this is probably the most woman-hating of everything

published in Femail recently, as usual, it is not an isolated

incident. We also have this

story about how long fringes are “putting lives at risk”.

made a sudden manoeuvre after their vision was impaired by their

Of course, most people wouldn’t think that 10 ‘sudden manoeuvres’

merited coverage in a national newspaper, but if there’s a ‘women are

flippant creatures, why are they allowed on the road anyway’ angle to

be had, you can be sure the Mail will seize on it! You might be

quarter of a million road casualties in the UK in 2006. But we are

concerned with 10 women women who didn’t have an accident. Great

And, no, this isn’t made up for by a sensible

and interesting piece in which newsreader Selina Scott identifies how female presenters get dropped when they get older, while their male colleagues carry on broadcasting well into their grayer years.

So often you seen people coming through the system without

a strong journliastic background, who haven’t covered a wide range of

shared under a Creative Commons license