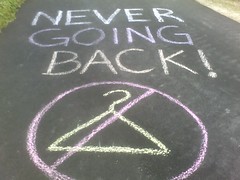 Abortion Rights has called a peaceful pro-choice protest against anti-abortion MP Ann Widdecome’s road show ‘Not on your life . .. or anyone else’s’ which is promoting anti-abortion goals around the Human Fertilisation and Embryology Bill.

The road show by ‘Ann Widdecombe and guests’ is jointly organised by hardline anti-abortion groups Care, Life and Right to Life Trust and is also being promoted by other anti-abortion organisations including the Christian Medical Fellowship.

If you can’t make it to London, maybe you could protest at one of the other dates of Widdecome’s tour:

There may be a protest organised in Liverpool, I’ll let you know when I get confirmation.

Awesome image by alexandralee, shared under a Creative Commons License.