Glamour and the blame game. 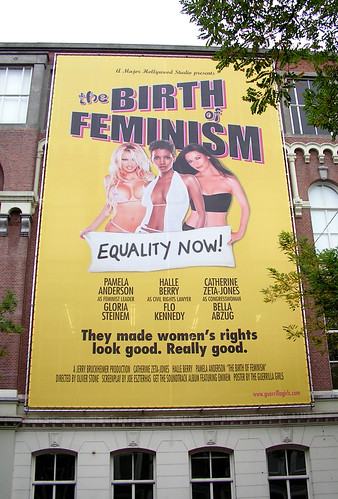 Reading Hannah Whittaker’s recent article on the link between glamour models and her own body image and low self esteem really struck a chord with me. It wasn’t long ago that I felt just the same. I saw these images of ‘hot’ women everywhere, the women that men desired, and I felt useless and ugly because I wasn’t like them, because men could never like me. Finding my then boyfriend’s hidden lads’ mags was the last straw – I cut myself. I hated that I wasn’t like that, I hated myself for getting sucked into this horrible situation of comparing myself with those women, and I hated those women for making me feel like shit, for making themselves objects for men who seemed to think they had a right to impossibly perfect sex objects, men who would never truly like me because I wasn’t one.

Feminism helped me deal with those feelings. By opening my eyes to patriarchy, it encouraged me to question why I felt it so important for men to be attracted to me. It freed me from the need to place so much emphasis on what I looked like and how I came across to others, and allowed me to assert an identity that for so long had battled with the patriarchal definition of woman and woman’s role. While I did this, I began to deal with the anger I felt towards the women who make their money out of conforming to what men want. They were also brought up with the pressure to be attractive to men above all else in life, and so I can hardly blame them for making this their source of earning if they feel they are attractive, nor for perhaps posing in FHM because it makes them feel attractive, so confirming that they have made it as women. I turned my anger away from them and towards the men who feel entitled to female flesh and, significantly, to the men who exploit these women’s desire to pose and to be attractive by creating a market and creating media in which this has to be done in a disrespectful and often degrading way. I mean, if you’re going to oggle a naked woman, at least have the decency not to call her a slut and reduce her to a boob size. THAT makes me far more angry nowadays than the women themselves ever did.

I was flicking through the TV channels the other day and The Hits was showing ‘FHM’s Top 100 Hot Videos’. Onscreen were three underwear clad women alternately bouncing on spacehoppers, riding mechanised buffalos and rolling in bubbles while pouting furiously at each the camera. All thought of blaming the patriarchy went out the window and I just wanted to scream : ‘What are you doing? Look at yourselves, what the hell are you doing? Bouncing on fricking spacehoppers so your boobies will wobble for the lads? Aren’t you embarrassed by this?!’

There, I’ve typed it out now and I sound like a terrible woman blamer (for a gut-wrenching example of women blaming, see here. Hat tip to Mind The Gap, once again.) As vibracobra argues in her post, setting ourselves up as some kind of feminist elite who just knows so much better than other women what is good for them, that resorts to shaming, mocking and blaming is just wrong. I think the image above, while I fully understand its intention, unfortunately does just that, by implicating that these women are personally letting us all down. Accusing women of ‘colluding with the patriarchy’ is harsh and unfair when most young women have no idea that our society is still patriarchal; I know I certainly didn’t until a few years ago.

But with so many young women seemingly happy to play the pouting, naked, boob bouncing role, I do think we need to somehow address young women and girls and encourage them to think about what conclusions can be drawn from the fact that it is almost without fail women who are displaying themselves for men in our music videos, magazines and films, and not the other way round, why it is generally women who pole dance for men in hundreds of strip clubs around the country, why it is women who wear tiny panties and high heels and shake their asses in hip hop music videos while men can just stare down possessively at them, covered by huge baggy t-shirts, and why it’s Suicide Girls that are available in their hundreds at the click of a mouse, with not a Suicide Boy in sight.

Is this really equality?