Saudi women to get behind the wheel 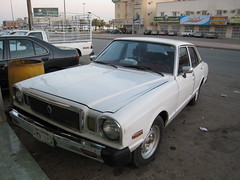 A brief blast of good news: the Saudi government has relented in the face of protests, and will remove the ban on women driving.

According to the Telegraph, the decree will be issued later this year. However, the paper reports that change is unlikely to be immediate, as barriers to getting insurance and licenses will have to be gotten rid of.

Fouzia al-Ayouni, the country’s most prominent women’s rights campaigner, has risked arrest by leading convoys of women drivers. “We have broken the barrier of fear,” she said. “We want the authorities to know that we’re here, that we want to drive, and that many people feel the way we do.”

Photo by bakar2005_2006, shared under a Creative Commons license