[Inspired by the concept of using Spare Rib to teach shorthand – here!]

Shorthand is a skill which has only really ever been of use to journalists, secretaries and the stenographers you see in court and Parliament. And, let’s face it, even among these groups it is being replaced by digital dictaphones.

Looking back now, I see that there are a couple of token compromises to the modern world – a “chairperson” here and there. But going through the exercises, I can see what annoyed/amused me so much at the time. Without fail, every professional character that appears in the book is a man. Every tradesperson is a man. The odd customer gets to be a woman. But apart from that, the only female ‘characters’ are the “girls” doing menial office jobs that are assumed to be the sole audience of the book. This excerpt says it all:

Yep, “James” gets a good business opportunity; “she” is a silly woman who hurts herself in the office. 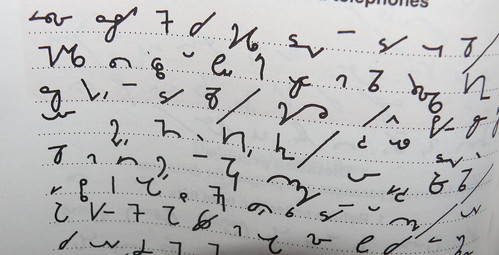 Do I have to say that the book never quite gets round to explaining how to do the shorthand for “Ms”?

Perhaps, after all, this is a subtle form of protest on the part of the four women who compiled this text book: sick of a career of taking notes from businessmen frolicing about in Wales, Jean Clarkson, Stephanie Hall, Celia Osborne, Ulli Parkinson and Meriel Bowers came up with a plan to expose the sexism, drudgery and dirty telephones of the “modern” office through shorthand exercises. Get them while they’re still training.

Perhaps after getting to chapter 25’s dictation exercises (“Dear Mr Shah, I have pleasure in supplying you with / the requested operating manual for your new appliance.”), and practicing their “x-blends” (“Because I was ill at Christmas my husband and children had to cook the Christmas dinner without me – it was an experiment they are not likely to attempt again”) and “ev-blends” (“There are several lively girls coming today from the local college to get information about the new job we have advertised at headquarters”), shorthand students are meant to absorb a sober lesson and go train to be an electrician.

Unfortunately, as we learn again today, that women in Europe still earn an average of 15% less than men and get lumbered with less interesting jobs.

In addition, getting rid of stereotypes is essential to promoting equality between women and men, as they continue to influence the choice of education, training or employment, participation in domestic and family duties, and representation in decision-making jobs.

As a sidenote – if only they applies this to their own ranks. The Times ran a story a few days ago, in which the inestimable Margot Wallström spoke out against the boy’s club in the Commission:

The names in the frame are familiar – including Tony Blair, the former Prime Minister, Bertie Ahern, the Irish Prime Minister, and Carl Bildt, the Swedish Foreign Secretary – and they are all men.

Moreover, Ms Wallström, a Swede with a quaint Scandinavian fondness for openness and transparency, has spoken out because they are being chosen through the same old European back channels.

I particularly love this quote:

“Where does this debate really take place? I am still puzzled,” said Ms Wallström, who joined the European Commission in a senior role in 1999.

“It is extremely strange. All I know is that it is always men, and very rarely do you hear about female candidates. Men choose men. That is the disadvantage of this situation.”