The flip-side of all those tax-breaks for married couples 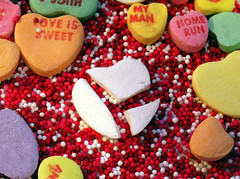 Regular readers will realise I am no fan of the Tories’ plan to give tax credits to married (straight) couples, as a sort of superglue to fix the breakdown of society into the proverbial shattered vase of single parents and hoodies.

But according to a survey by a law firm, a massive 59% of married women said they would leave their husbands if “financial stability was not a problem” and 51% of married men described their situation as “loveless”.

It strikes me that this is even more evidence that it is just not a good idea to try and use economic sanctions to keep people in a married state.

Photo by Sister72, shared under a Creative Commons license