A look at the Republican’s front runner 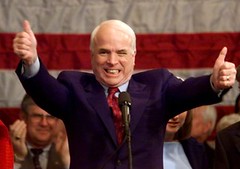 Super Tuesday is over, and it is still not clear whether Hillary Clinton or Barack Obama will be the Democrat fighting for the White House come November. But Senator John McCain has emerged as a clear front-runner for the Republicans.

McCain seems to have a bit of a reputation as a cuddly Republican – he sometimes votes with the Democrats and on occasion he has taken a progressive stance on issues such as immigration and climate change. But just because the radicals of the US right hate him, doesn’t mean we should welcome him with open arms.

Kate Smurthwaite has done a breakdown of McCain’s voting record, which should prove sober reading for anyone who thinks he’s a ‘least-worst’ candidate on the Republican side.

Some highlights – on abortion, he has voted in favour of a ban on abortion in military bases, a ban on partial-birth abortions and to force the notification of parents when their under-age kids get out-of-state abortions. He has voted against extending hate crime and workplace discrimination legislation to cover sexual orientation. He supports the death penalty. And that’s not the half of it. Seriously, check out Kate’s post for the full story.

And if you are ready to believe that’s the McCain of the past, let’s look at some recent evidence from the current campaign. First up, McCain appears to have used images of the daughter he adopted from Bangladesh to promote an ugly anti-abortion agenda. In a mail-out advert, McCain featured a photo of his daughter as a baby, using language about promoting adoption and crisis pregnancy meant to speak directly to anti-abortion conservatives.

Then we have the anti-gay ‘robocall’ (one of those annoying thingies which phones you up and reads an automated message) used by McCain in Florida:

We care deeply about traditional values and protecting families. And we need someone who will not waver in the White House: Ending abortion, preserving the sanctity of marriage, stopping the trash on the airwaves and attempts to ban God from every corner of society. These issues are core to our being.

“Mitt Romney thinks he can fool us. He supported abortion on demand, even allowed a law mandating taxpayer-funding for abortion. He says he changed his mind, but he still hasn’t changed the law. He told gay organizers in Massachusetts he would be a stronger advocate for special rights than even Ted Kennedy. Now, it’s something different.

“Unfortunately, on issue after issue Mitt Romney has treated social issues voters as fools, thinking we won’t catch on. Sorry, Mitt, we know you aren’t trustworthy on the most important issue and you aren’t a conservative

And let’s not forget the ever-more-likely idea that McCain will add Mike “Aids victims should be quarantined” Huckabee to his ticket as candidate for vice-president.