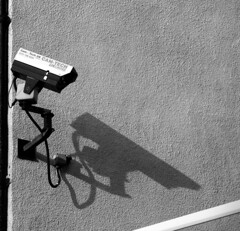 Recently the Home Secretary, Jacqui Smith, revealed that she wouldn’t feel safe walking alone at night in London. She wasn’t explicit about why, and yet I can’t help but feel that what she really meant was “being female, I don’t feel safe”. In any case, she didn’t need to admit that her fear for her personal safety stemmed from her gender: Liberal Democrat MP Chris Huhne did it for her. The Times quotes Huhne as saying it is “astonishing” that after 10 years of Labour government women still don’t feel safe walking around alone at night.

Huhne’s gendered observations, which wheel out and enforce every societal stereotypes of women as fearful, weak and vulnerable, are actually not backed up by Government statistics, which show that it is young men aged 16-24 who are most at risk of violent crime outside the home. Statistics that show men as the most likely victims of violent crime outside of the home should be enough to demonstrate that there is actually nothing ‘feminine’ about feeling unsafe. Here, however, we have yet another example of how quickly people think of women as ‘naturally’ frightened – of course, that’s how we’re supposed to be, isn’t it?

Huhne is not the only one guilty of ignoring the issue. It’s not like any of the other opposition politicians made a much better job of asking themselves why the Home Secretary, like so many other women, feels unsafe when alone after dark. Huhne came up with the same worn-out, clichéd answer that many do, relying upon stereotypes of women as somehow either inferior, incapable, or both. The mainstream media didn’t do any better, while the Tories seized the opportunity to slate Labour’s record on bringing down violent crime. The fact that the issue has become just another form of political currency is no surprise at all, but it doesn’t stop me from being amazed at the sheer stupidity of our supposed representatives. It’s quite clear what is causing, perpetuating and amplifying the problem here: the sodding great elephant in the room is patriarchy.

I ventured into the bowels of the Home Office website (something I urge you not to do if you’re running short on patience, or have an allergy to bureaucratic jargon) to dig up some more information on the Home Office strategy for dealing with violence. Ready? The Government’s grand plan is “tackling more serious violence”. Yep, that’s your lot people, let’s tackle violence by tackling violence. It’s brilliant, it’s fool-proof. Some might even call it revolutionary, before, of course, they start weeping with frustration at the sheer audacity with which the problem is being side-stepped. Stamping and wailing aside, in the main I’m terrified that there’s a typology of violence, meaning that not all violence is considered ‘serious’. With this in mind, I’m yet more concerned that the less serious violence (which probably just about covers the sort of intimidation that women are supposed to be worrying about on a night out) can apparently be put on the backburner for a while. Given the abject failure to recognise the role that patriarchal structures have to play in the use of violence and intimidation against women, I reckon it’s time for a feminist re-think.

First things first, we can dispense with all these expensive think-tanks and surveys and empty ‘crime reduction strategies’ – what we really need is a Government advisory panel composed entirely of a crack team of hardened feminists, complete with all the metaphorical tools needed to dismantle the patriarchy. Blazing a glorious trail through the Home Office, the Feminist Advisory Panel (we’ll work on the acronym later) would transform current, short-sighted ideas on how best to combat violence by addressing the cause, rather than the symptoms. Existing policy seems to suggest that what we need to have more of to make people feel safer is presence. More police officers, more CCTV cameras, more offences with which people can be charged, more ways that people can be identified. Feminism turns that on its head.

Meeting violence with violence (albeit state-maintained, ‘legitimate’ violence – a contradiction in terms if ever I heard one) and increasing the number of police officers on the streets does nothing to fight the culture that generates the feeling of fear in the first place: it only makes it stronger. The same is true of CCTV cameras. Although the intention is clearly to defend those who are likely to suffer from attacks or intimidation – to offer both preventative and follow-up measures – the outcome is instead to normalise the violence.

If the night is no place for a woman, then surely she should understand that and stay at home?

Walking alone at night shouldn’t be classed as a privilege, whether you’re female or male. But increasing the resources invested in policing and surveillance, coupled with the blatantly gendered ideas of some of our current politicians, simply reinforces the dominant societal belief that women are right to be scared of going out at night, because the night does not belong to them. The problem is being framed in terms of the actions of the victims, and not the perpetrators. Women are effectively being told that they’re interlopers who are only safe in the alien environment of the night when they’re protected by a enough people; the violence is going to happen anyway, so if it’s easier to find someone to take care of you then things will be OK. But women shouldn’t need protecting when they’re out alone at night, they need respecting instead. Moreover, if in one brilliantly simple move, we paid women an equal wage for equal work, we might find that they wouldn’t be forced into taking shift or night work that means they finish at two o’clock in the morning, when public transport is sleeping safely, and they’re not.

Societal norms that both implicitly and explicitly tell women that they should not be out at night also strengthen exactly the sort of nauseating arguments advanced by those in the ‘she was asking for it’ camp that are outlined above. If the night is no place for a woman, then surely she should understand that and stay at home? The danger of this kind of attitude cannot be understated: when the belief that women should not be out alone at night is allowed to take hold, those women that dare to defy the supposedly universal rules of human behaviour are seen as inviting, or worse still deserving, of the violence they might encounter. It is this disturbingly common kind of Daily Mail logic that also ties the way women dress to their likelihood of being attacked – should a woman dare to dress ‘provocatively’, she should practically expect to meet with a suitable punishment for disobeying the norms which tell her she should be confined at night. This is why movements like Take Back the Night are so important as a base for challenging traditional policy-making methods. They succeed in offering solutions where the tired ideas pedalled out by the Home Office fail because they address the cause of the problem – the stifling of a person’s right as a human being to live a life free from violence. They certainly don’t provide quick fixes, but they play a fundamental role in focusing attention on frequently ignored women’s voices.

Just like Andrea Dworkin said: “Women have been taught that, for us, the earth is flat, and that if we venture out, we will fall off the edge.” And if we continue to rely upon the same weary old structures to ‘protect’ women from literally venturing out, it doesn’t look likely that we’re going to make it anywhere near the edge. If we’re to transform the picture and have the freedom to both see and be seen in more than two dimensions, we have to continue to challenge those elements that tell us to be scared.

Jo is a 22 year-old politics research student in Bath. If she is walking home alone, late at night, occasionally stopping for a kebab just like the Home Secretary, she mostly feels safe. If she sometimes feels unsafe just because she’s a woman, she visualises hitting her would-be assailants over the head with a hardback copy of Sexual Politics