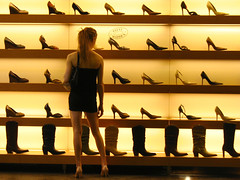 An Italian urologist and high-heel enthusiast has caused a stir, by claiming that the shoes improve women’s sex lives, by putting the pelvic floor muscles in the optimum position.

Dr Maria Cerruto, who the BBC describes as a “self-professed lover of the sexy shoe”, has apparently been on a mission to prove high heels are not bad for women’s health after all.

Of course, this is something of a difficult one to prove – you only have to speak to an actual woman who has worn heels to figure out that they are deeply uncomfortable, at least until you train your feet to happily accept the pain. And they have long been linked to all sorts of foot problems. Check out this colour x-ray of a woman’s foot in high heels for more information.

But setting aside the pros and cons of this type of footwear, let’s unpack this story a tiny bit. First we have Dr Cerruto herself. She is a urologist. Not a foot specialist. A urologist. I can’t help but wonder if matters foot-related are bit outside her field of reference, as is the task of balancing any potential benefit with the damage done to toes in the meantime.

Let’s look at the study she carried out:

She said her study of 66 women under 50 found that those who held their foot at a 15 degree angle to the ground – the equivalent of a two inch heel – had as good posture as those who wore flat shoes, and crucially showed less electrical activity in their pelvic muscles.

This suggested the muscles were at an optimum position, which could well improve their strength and ability to contract.

I don’t know much about pelvic muscles, but doesn’t this stuff about “electrical activity” sound a bit weird? I don’t remember hearing much about getting your calf muscle, or your bicep in the correct position to exercise it based on electrical activity. I’m no scientist of course, but does this seem wacky to anyone else? [edit: not weird, apparently! Reader Cara points out: “What she is describing is measuring the electrical activity of the muscles; a legitimate scientific technique indicating how hard the

muscles are working (as you say, i.e. the muscles were in the optimum position).

However, you are correct that ‘in the optimum position’ is not the same thing as toning.”] Regardless, what she found seems to be that high heels might put your pelvic floor muscles in a good place, *not* actually exercise them. In other words, wearing painful shoes is no substitute for actual things you can do to increase the amount of sexy fun you are having.

The BBC quotes another expert, who puts it like this:

Gill Brook, a women’s health physiotherapist in Bradford, stressed the findings did not suggest that stilettos were a good thing for those keen on improving their pelvic floor function.

“But for women who like a slightly higher heel, these are reassuring findings – although we haven’t yet done away with the need for regular exercises to maintain what is such an important part of the female body.”

In addition, this is all based on a letter to a urology journal. As in, she doesn’t seem to have submitted an article for peer review.

So the question remains – why so much excitement about it in the BBC news room? Could it be because a) it justifies the use of high heels and b) it links a shoe that is meant to intrinsically make women look sexier with an actual increase in sexual performance? Does anyone else find that a bit… creepy?

Photo by Orin Optiglot, shared under a Creative Commons license