Make a film on your mobile phone 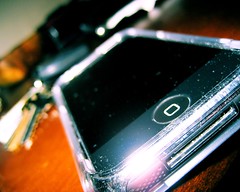 The Birds Eye Film Festival is running a really interesting group project, collating short films made by “women everywhere” on their mobile phones.

I love the DIY/anyone can be a film-maker element of this project:

As you’ll see we’ve an amazing line up of women-directed films at this fest. But we don’t want to stop at watching movies. We like to get our hands dirty. And ladies, wherever you are, whoever you are, we want you to join in.

It is called the ‘Overheated Symphony’, and the films will be united by an “overheated” theme.

Are you warming to the theme? Hot under the collar? Concerned that the planet is getting warmer? Filled with blazing rage? Caught in the heat of passion? Tell Aunt BEV all about it.

The submissions will be edited live(!) in the ICA bar, then uploaded to the website. More info here. Of course, it’s not the only effort to get people making movies, but it’s great that this is focusing on women film-makers. So go out and make a movie.

Also, you can now see the full festival line-up and buy tickets.

Photo by BrysonPhoto.com, shared under a Creative Commons license