Corsets are coming back. Five hundred years after the ladies of the Italian court were forcibly bound into iron cinchers to squeeze their waists to a diameter of 13 inches, Western society is once more choking on boning and lace. As the fetish and burlesque trends for vintage tight-lacing bring the corset increasingly into the fashion mainstream, we are assaulted in every department store by racks of ‘control’ underwear endorsed by gurning celebrity fashionistas: girdles by any other name. Male and female fans of corsetry claim that wearing such garments is now no more than a personal choice, far removed from the days when wearing restrictive, controlling underwear was imposed upon women of all classes. But have we really come so far?

The basic assumption of ‘control’ underwear is, as it always has been, that the female body needs to be controlled. The psychology of control-underwear goes far beyond mere fat-hatred. The female body is put forward as wayward and deficient – morally, sexually, socially and physically – and in desperate need of literally binding into place.

The female body was seen a crude, animalistic ‘imitation’ of the male form, which required external armour to forcibly ‘hoik’ its ungainly mass up the evolutionary ladder

The tradition of the corset as compensation for a universal, ‘natural’ female deficit is centuries old. British doctor and sexual psychologist Havelock Ellis was among the experts cited in the Victorian popular press as claiming that female humans required corseting because the evolution from “horizontality to verticality” was more difficult for females than for males. “Woman might be physiologically truer to herself,” Havelock Ellis insisted, “if she went always on all fours. It is because the fall of the viscera in woman when she imitated man by standing erect induced such profound physiological displacements… that the corset is morphologically essential.” In other words, the female body was a crude, animalistic ‘imitation’ of the male form, which required external armour to forcibly ‘hoik’ its ungainly mass up the evolutionary ladder.

Corset-wearing was also a moral obligation. Throughout the 2,000-year history of corsetry, the more elaborate and constricting her undergarments, and the more visibly altered her figure, the better-bred and better-behaved a woman was assumed to be. This aspect of the practice was also, of course, a marker of class: women from the upper echelons of society could afford expensive, complicated undergarments, from corsets and girdles to crinolines, bustles and stays. Moreover, if a woman was rich enough not to have to work, she could afford to wear clothing that restricted her movement and breathing. Upper middle class men in the West have, for centuries, taken pride in being able to keep their wives and daughters as living dolls: stiffly-moving, hardly breathing mannequins pinned in by steel armour, bone and lace.

Corsets are still, of course, both luxury items and cumbersome garments that are cherished for their social and sexual symbology. The wearing of a corset still speaks of a substantial clothing investment unavailable to the lower-waged without patronage. In certain circles, the buying of a young woman’s first corset has once more become the financial and physical marker of a passage into maintained womanhood.

As Naomi Wolf noted in The Beauty Myth, corsets and girdles did not so much disappear in the mid-20th century as become internalised through diet, exercise and plastic surgery

I’ve worn corsets in my time. A few weeks ago, I allowed a goth friend to strap me into a black vinyl creation for a party; no sooner had we arrived, however, than I realised that the uncomfortable contraption I was wearing was preventing me from doing all of the things I normally like to do at parties: eat, drink, dance, sit down and stand up without difficulty, and move from room to room. In the process it did, admittedly, make my midsection resemble a stack of tangerines and almost choke me on my own breasts, but the physical transformation was scant compensation for a thoroughly unenjoyable evening. Worse still was the dawning apprehension that I’d done this to myself voluntarily, in the name of style.

As a modern fashion statement, the corset is less than subtle. Corsets are even more of a powerful symbol of female self-restriction when worn outside the clothing, in the quasi-burlesque style adopted by contemporary mainstream fashion: ‘control’ underwear as style statement. The statement in particular, of course, is one of voluntary submission to the idea that women need to be controlled physically and psychologically more than they need freedom of breath and movement. Worn as a fashion accessory, the corset as armour overpowers the rest of an outfit just as it restricts the wearer’s activity – the corset wears the woman, shaping the persona she projects and the nature of the power that she commands. Umberto Eco comments upon the nature of female body-armour in Faith in Fakes: Travels in Hyperreality: 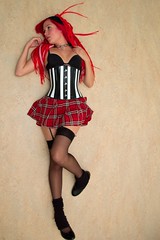 “…the age-old female spell is due also to the fact that society has imposed armours on women, forcing them to neglect the exercise of thought. Woman has been enslaved by fashion not only because, in obliging her to be attractive, to maintain an ethereal demeanour, to be pretty and stimulating, it made her a sex object; she has been enslaved chiefly because the clothing counseled for her forced her psychologically to live for the exterior. And this makes us realise how intellectually gifted and heroic a girl had to be before she could become, in those clothes, Madame de Sévigné, Vittoria Colonna, Madame Curie, or Rosa Luxemburg.”

Modern fans of the garment claim that wearing the corset today is an entirely different matter, because it is not compulsory and wearers are in fact subverting the dominant paradigm. This is, of course, nonsense – nonsense as suspect as the claim that ‘lads’ mags’ are harmless works of irony whose opponents can’t take a joke. In reality, the notion that the female body needs to be controlled and tamed by any means necessary is very much still with us.

As Naomi Wolf noted in The Beauty Myth, corsets and girdles did not so much disappear in the mid-20th century as become internalised through diet, exercise and plastic surgery. Where once we were expected to control our messy, unappealing female bodies with the help of iron, steel, whalebone, lycra and bootlace-cinching, with all the associated breathing and digestive disorders, that discipline is now expected to come from within, exerted onto the flesh itself – and often with equally harmful consequences. While fashion moguls of the 21st century try to shove every hopeless Bridget Jones back into ‘control pants’, we are still wrestling against pressure to don the ‘Invisible Corset’ – the backbreaking work of exercise, self-starvation or painful operations required to maintain an unnaturally slim, toned body.

Self-restriction and bodily self-discipline are very far from light-hearted ‘choices’ for women at the turn of the 21st century. On the contrary, if we do not exercise a hefty amount of ‘control’ over these wayward female bodies of ours, we face disrespect, ostracisation and plummeting self-esteem. Young girls dressing up in corsets are playing with an ideal of carefree choice that does not, in fact, exist.

Laurie Penny is a freelance journalist and general troublemaker. She is involved in Feminist Fightback and blogs at Pennyred for Red Pepper magazine