Massive carnival of feminists and other reading materials 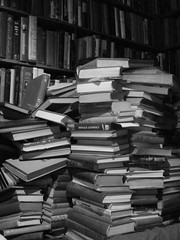 The 56th Carnival of Feminists is up now, at Redemption Blues.

RB takes an unusual but very effective approach – rather than just providing a list of links, she supplements her choices with dense text including quotes from books (I know, shocking!) So I am not going to pick favourites this time; I think it’s important to read the whole shebang in context.

But I will quote the message of solidarity with which RB begins the carnival:

In spite of the controversy, the occasional bouts of mutual recrimination, wounding inflicted intentional or otherwise one of our primary virtues is open-mindedness, our willingness to reassess our preconceptions, examine our flaws and blind spots and focus on what unites us as women, whether we were born with female reproductive organs or not.

Katie Haegele was kind enough to send me a review copy of her zine ‘White Blackbirds: conversations with women who aren’t married and don’t want to be’. The 11 women answer questions such as: Why don’t you want to get married? When did you decide this? Are you in a relationship now? and Do you have any unmarried role models?

The answers are illuminating. For example, 30 year-old Joanna is opposed to the idea that “the state should have the right to validate m relationship, especially when it does so on a discriminatory basis”. But the New Yorker had to get married to gain access to health insurance:

We’re not out to a lot of people about being married, though. And I hate that when we do tell folks, even if we tell them specifically why we bothered making it legal, it seems to make invisible the fact that we are both queer… I wish I had another option.

Obviously when we fall in love we want to be together forever, but we don’t need to make it harder and more painful to separate if that time comes. And I’ve been in enough relationships and had enough experiences to know that anything could happen.

Great stuff. You can buy the zine on Etsy, along with Haegele’s other zines.

And, finally, the third issue of feminist magazine make/shift landed on my doormat this morning. I’ve not had time to give it a proper read, but it looks really interesting:

Photo by austinevan, shared under a Creative Commons license