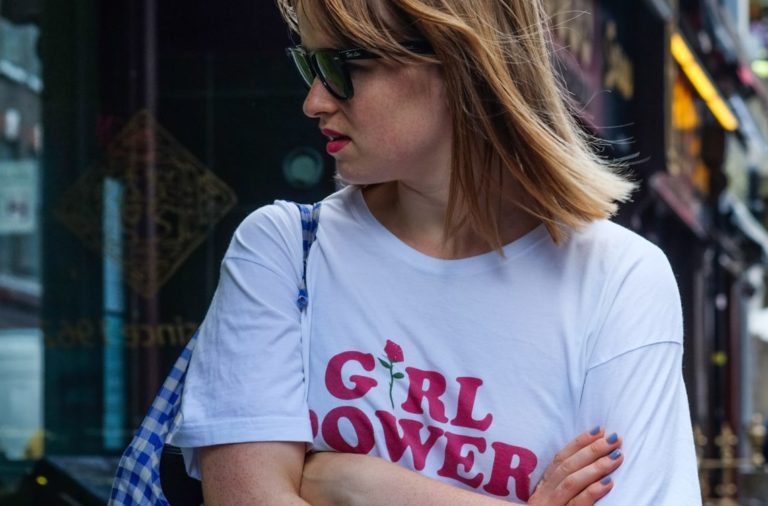 Last week I got to relive a childhood dream. I went to see the Spice Girls in concert. I screamed, I shouted; they danced, they sang. It was a perfectly choreographed evening of pop hits and cheesy crowd interaction (“We always have such a good time when we come to Montreal,” Emma gushes at one point.) The near-jubilant atmosphere was fuelled solely by oestrogen and handbags – the almost solely female audience had left their men at home and were out with the girls, looking for a song and a laugh.

True to the media hype which has been building up steadily for months, the five delivered what we really, really wanted. Sporty, Baby, Posh, Ginger and Scary gave us a roller-coaster ride through the old hits, letting us relive their ’90s heyday and saving the best (‘Wannabe’) for last. Glitzy outfit (all provided by Victoria’s ‘friend’ Roberto Cavalli) followed glitzy outfit, dancers leapt around the stage with boundless energy, and various shiny props rose and fell from different parts of the stage. A third of the show was taken up with solo material, which means we were subjected to a rather bizarre performance by Mel B involving a whip, while Victoria played to her strengths and avoided any sort of singing, in favour of a brief walk down a fake runway.

For all their skin-tight outfits, shorter than short skirts and even Victoria’s assets, the five are still physical embodiments of the inner tweenager lurking in every audience member

Dissatisfaction, or even irony, were, however, impossible. The reason the Spice Girls made it in the first place was the sincerity which lurked behind brand Spice and, 10 years on, the characters who made ‘Girl Power’ a household phrase are still here. They differ from modern groups in that we can see personalities peeking out from behind the caricatures. Can you imagine bland contemporary pop outfits such as Girls Aloud pinching Prince Charles’ bum as Geri did at the Royal Variety Show, or being invited to meet Nelson Mandela in South Africa? The best parts of the show were when we got to see the group break out of the mould and appear to be genuinely enjoying themselves. Mel B falls over, they ad-lib banter, and two Spice kids are watching from the front row. In spite of Victoria’s agonising posing, the five come across as real people.

What’s more, compared again to their contemporary rivals, the Spice Girls aren’t sexy. Their brief, post-Geri attempt at sex appeal (‘Holler’ – “I wanna make you holler/ Make you scream my name”) goes down like a lead balloon. Geri’s attempt at French to please the Montreal crowd – a saucy “Voulez-vous….” – gets a skeletal laugh and, as Emma sings “put it on, put it on” during the safe-sex ballad ‘2 Become 1’, she shakes her finger at the crowd, gently berating us like naughty children. For all their skin-tight outfits, shorter than short skirts and even Victoria’s assets, the five are still physical embodiments of the inner tweenager lurking in every audience member – little girls dancing along to the radio with a microphone-hairbrush. The concert is one giant, expensive karaoke show.

The Spice Girls hark back to a more innocent day in the pop world, when groups were marketed solely for their young teen audience, not also for the FHM lusts of older watching eyes – think Britney’s provocative pose on the cover of Rolling Stone, the porn show that is the Pussycat Dolls. The near absence of men in the audience proved that they have made their millions by appealing almost solely to women. Standing in an arena full of thousands of (clearly loud and confident) women in the midst of North America, I couldn’t help but wonder if I was partaking in my first ever feminist gathering. Had we all been brought together under one common cause? Was ‘Girl Power’ still alive and kicking, uniting sisters the world over? Could we forget Geri’s glamour model past and stand shoulder to shoulder, as one?

‘Girl Power’ became the Nike ‘swoosh’, the Adidas stripes, the Starbucks green of the music world

Well, no, but we’re confusing ‘Girl Power’ with something a little more important here. I remember, even as an 11 year-old, being uncomfortable with the idea. You could chant it like a mantra, stick up two fingers in a peace sign, but what did it all mean? Could you yell ‘Girl Power’ in a short skirt and platform heels? Could you even yell it as (as Geri was then) a 25 year-old woman? It was defined loosely by the band as “being confident in yourself”. So, yes, you can wear, act, do whatever you like as long as you’re happy. Don’t let anyone tell you what to do. Which, in many ways, isn’t a million miles away from what would constitute most people’s description of contemporary feminism. The Spice Girls promoted female friendship, and provided young girls with images of happy, confident woman at a time when boy bands (Boyzone, Take That, the Backstreet Boys) flooded the market. Clichéd as it may be, they did in some ways provide a positive role model for young girls.

Alongside the positivity however, lurked eating disorders, dodgy modelling pasts and impeccable hair and make-up beyond any 13 year-old’s pocket money. ‘Girl Power’ overtook anything it had originally meant, to become a catch-all expression for everything the five came to represent. ‘Girl Power’ was not a statement – it was a lifestyle. If the band prefigured the sexed-up groups of the ’00s, they also laid the way for a full out assault on kids’ (and parents’) bank balances. Appearing in commercials for everything from Walker’s crisps to Pepsi (and reportedly signing a $5 million contract with Tesco on their comeback tour) and even starring in their own film, the band managed to turn a sentiment into a brand. Buy into the Spice Girls, and you bought into power, friendship and happiness. ‘Girl Power’ became the Nike ‘swoosh’, the Adidas stripes, the Starbucks green of the music world. Flick through the pages of any glossy magazine and find a spread of Victoria and David Beckham vacantly advertising perfume, and you’ll be able to see that Posh Spice has taken this talent to dizzying new heights.

‘Girl Power’ is feminism, but feminism by marketed, picture-perfect, precise numbers. The Spice Girls define the ’90s, not just because of the celebrity wedding of the century in the shape of the Beckhams, or the already-dated shockingly colourful outfits, or even the iconic Union Jack dress. They represent the ability of contemporary culture to turn people into things. The inventions of Baby, Sporty, et al, stripped away the person to leave behind a commodity. In their wake we have pop by numbers, the world of the X Factor and Pop Idol where music can be bought into and forgotten about in the same breath.

In spite of all this, occasionally, in Montreal, we saw the mask fall and five real people appear. Geri, Victoria, Emma and the Mels were trussed, feathered and even (tut, tut) lipsynching at times, but, even so, some humanity got the chance to peek through. The alter-ego nicknames have not quite been allowed to take over. And that, after all, is what gave ‘Girl Power’ its bite to begin with.

Jennifer Thomson is currently living in Québec, Canada. She once appeared as Ginger Spice in a primary school talent show