Come on Boris, what you got? 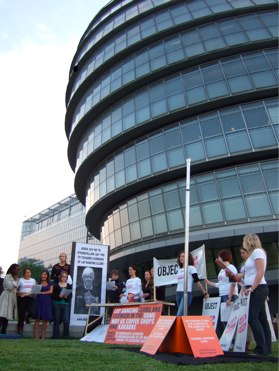 Chants of “Come on Boris, what you got, what you got for women?” surprised tourists and city workers outside London’s City Hall a few weeks ago, as Object’s ‘Stripping the Illusion’ campaign landed on the doorstep of new mayor, Boris Johnson. Campaigners held placards asking Boris to “Say no to Stringfellow, say yes to re-licensing lap dancing clubs” and urged him to challenge laws which mean that lap dance clubs are licensed in the same way as cafes and karaoke bars.

Stripping the Illusion is aiming to change these laws. Spearheaded by Object, it hit parliament on 18 June, when Durham MP Roberta Blackman-Woods introduced a 10 minute rule bill calling for lap-dancing clubs to be licensed as ‘sex encounter establishments’ (SEEs).

Roberta Blackman-Woods’ bill, which has cross-party support and is backed by a growing number of councils, called for closure of this loophole and passed unopposed. Whilst 10 minute rule bills rarely make it into law, on the same day the government wrote to every local council asking if they would like greater powers to regulate lap-dancing clubs.

In London, the campaign is calling on new mayor Boris Johnson to add his support. Boris has a patchy track record on rejecting sexism. One of his most vocal mayoral campaign supporters was none other than Peter Stringfellow. The lap-dance club owner offered up his clubs as fundraising venues, telling journalists: “I’ll tell you what I like about Boris… he’s a proper red-blooded male. He speaks to me, but he looks at my wife Bella.”

On a brighter note, during his election campaign Boris did pledge funding for four new rape crisis centres, stating that he wanted to improve services for the “ignored victims of sexual violence”. This formed part of his manifesto to make London safer.

Given the fact that male violence against women remains endemic both nationwide and in the capital this funding is much needed. Less than 6% of rapes reported to the Metropolitan Police Authority end in a conviction. Research by Amnesty in 2005 revealed that a significant chunk of public opinion blames women for sexual assaults committed against them. Something is obviously going seriously wrong with attitudes towards violence against women.

Object therefore decided to ask the new mayor to build on his pledge and “join up the dots” between improving services for the survivors of sexual violence and also tackling the attitudes underpinning this violence, in particular the dehumanisation of women into sex objects and not people.

As the new mayor of London, Boris is in a unique position to call for change. His predecessor Ken Livingstone promised to lobby for reclassification if re-elected. In the words of the Object activists outside City Hall, come on Boris. What you got for women when it comes to tackling this urgent issue head on?

A first step towards this would be to address the legal loophole which has made it very easy for lap-dancing clubs to expand across the UK, in the process becoming normal places for nights out, corporate entertainment, even charity fundraisers. Given the very principle on which lap-dancing clubs operate – the buying of women as readily available commodities and the lack of respect that goes with this – this mainstreaming is of major concern to groups that work to tackle violence against women.

“Never has there been a more critical time for everyone to work together to say No to sexual violence. It’s time to say goodbye to all attitudes, systems, practices and businesses that allow sexual violence to continue. Reclassifying lap dancing clubs is vital in achieving this.” says Dr Nicole Westmarland, chair of Rape Crisis England and Wales.

Westmarland’s call is echoed by Chris Green of the White Ribbon Campaign; “Any expansion of lap dancing clubs feeds an increase in the lack of respect for women. Men in the White Ribbon Campaign are committed to ending violence against women. As we work for an age when all men understand the implications of their support of these clubs, and they all choose not to attend them, we hope that Boris will support the demand for reclassification of lap dancing clubs.”

The singing and chanting Object campaigners outside City Hall called on Boris not only to support this demand, but to lobby central government on London’s behalf and help London’s councils to do so. There is demand for this – a review of striptease policy at Tower Hamlets Council recently recommended lobbying for lap-dancing clubs to be licensed as SEEs and over half of London’s councils are concerned with current licensing, according to research by Eaves Housing. As the Olympics draw closer, the need to do something sooner rather than later is clear given the links between major sporting events and increased sexual exploitation.

As the new mayor of London, Boris is in a unique position to call for change. His predecessor Ken Livingstone promised to lobby for reclassification if re-elected. In the words of the Object activists outside City Hall, come on Boris. What you got for women when it comes to tackling this urgent issue head on?

What you can do:

Sign our e-petition and write to your MP to ask that they sign EDM 1375. More details here.