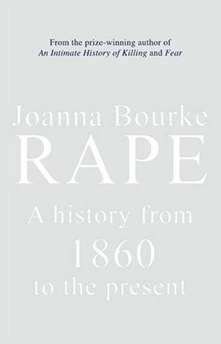 Although at times distinctly uncomfortable reading and definitely one of those books for which the word “great” or “fabulous” is both apposite and somehow wrong, Joanna Bourke’s Rape: A history from 1860 to the present is a meticulous and wide-ranging examination of the phenomenon of rape.

It is an academic book, but one which is simultaneously accessible and scholarly. Bourke begins with an explanation of her motivation and it’s an introduction which marks out this book as of particular interest to feminists:

On or about 30 February 2005, I became enraged. I am ashamed to admit it, but this book had been born of fear, not anger. Sexual violence was familiar to me. Like all women, I had been warned of sexual danger since childhood… On that day in February, however, I read a Home Office report that revealed only 5% of rapes reported to the police in the UK ever end in conviction. My lifelong awareness of the harms caused by sexual violence suddenly crystallised into a political and intellectual project.

Bourke is a historian, by training, and she brings that critical eye to the topic. This isn’t a polemic, like Andrea Dworkin’s writing, except insomuch as it’s an expression of the anger Bourke talks about in her introduction, nor is it a wide ranging exploration like Susan Brownmiller or Kate Millett.

It is, instead, a sharply observed look at the forms that rape takes in US and UK society from 1860 onwards, covering such concepts as “Rapacious Bodies”, therapies, ways of excusing rape, the racialisation of rape, myths of rape and rape convictions (or lack of them) and the reasons why (and more).

Additionally, Bourke treads a careful line between acknowledging some of the silenced truths about rape (for example, female perpetrators who rape men and women) and highlighting the inconsistencies and foibles of legal, medical and social discourses about rape. For example, in her chapter on invasive therapies as treatment for rape, she highlights that “there was one type of sex offender believed to benefit particularly by lobotomy: the man who molested young boys”, Bourke’s point being that invasive techniques (the most radical of responses to rape) were advocated for those crimes seems as most heinous, that is crimes against boys and men, not against girls and women.

Bourke’s handling of sex crimes against men is similarly upfront: “The humiliation of sexual assault is not restricted to one gender; it is shared by both. Similar insults are used.”

She also highlights some uncomfortable images for us, for example whilst penile plethysmography (to measure erectile response while exposed to supposed sexually arousing material) is widely known about, I was unaware of a female version, the vaginal photoplethysmograph. Disquietingly the vaginal photoplethysmograph involves, as perhaps the name suggests, the insertion of a probe into the vagina and was used to study female sexual “deviants” – in other words was a medically sanctioned version of vaginal invasion.

Bourke also, however, for both cases, cites evidence for the limitations of the plethysmograph: “80% of rapists and child molesters were able to ‘voluntarily and completely inhibit arousal in the presence of stimuli that had previously elicited their highest level of arousal'”. And it is, perhaps, in these in-depth looks at the known-yet-unknown sections of the history of the phenomenon that Bourke does her best work. Take this section on the marital rape exemption:

“According to [Sir Matthew] Hale, a wife gave lifelong consent to sexual intercourse with her husband. Under the marriage vows husband and wife became ‘one person under the law’. It was a contract that she cannot retract… This did not mean that a husband was granted absolute rights over his wife’s body… but her vagina was legally assumed to be at his beck and call.”

This sort of pithy rejoinder is a trademark of Bourke’s writing, and turns what might otherwise be a very depressing account into a far more readable tome. Bourke goes on, in this section, to comment on the ways in which establishment figures like John Stuart Mill responded to this “virtual slavery” and quotes from feminist historical figures like Victoria Woodhill, who said on the matter that she “would rather by the labour slave of a master, with his whip cracking continually about my ears, than the forced sex slave of any man a single hour”.

However Bourke brings the discussion up-to-date and also looks at more modern apologists for the exemption, including those who argued that “a wife’s ability to accuse her husband of rape would threaten the entire institution of marriage”. Again this broad scope, but very detailed review is a hallmark of this text.

Bourke also doesn’t shy away from linking the myths and treatment of rape to discourses of power such as racism and elitism and, indeed, makes strong argument and highlights ample evidence for, in particular, the way rape has been racialised. This is both in terms of black men’s “rapacious bodies” and black women’s bodies which were deemed inviolate or unable to be raped, either because they lacked the humanity to be classed as victims or were deemed sexually available and sexually aroused at all times.

Bourke makes the point, succinctly and powerfully, that rape cannot and should not be analysed as a phenomenon outside of “normal” society or power relationships but is, in fact, subject to the same discourses, just like the need to declare the perpetrator of a socially unpalatable act (like rape) as “other”, either deranged, sociopathic or plain evil. But I want to end by focusing, as Bourke does, on the ways in which victims of abuse are treated.

As Bourke says, the response to rape has always been “developed within a dominant culture that refused to admit that certain types of sexual violence were wrong, let alone profoundly offensive… feminists were addressing a society in which victims of sexual violence were routinely belittled in the courts, mass media and everyday encounters… When these feminists employed the term ‘victim’ to refer to women, they were engaged in a robust confrontation of patriarchal institutions and customs. By emphasizing the devastating effects of power structures on women’s emotional and psychological development, they ignited a revolution.”

It’s an unfinished revolution, but one which is ongoing and is still needed and the reasons for that need and that work are ably captured in this book. It might not be top of the list for granny’s birthday present (depending on who you grandmother is, I suppose) but it does make for uncomfortable, unsettling and worthwhile reading.