Eucalyptus is a feminist issue 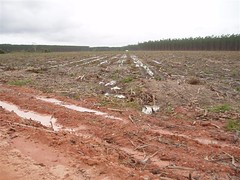 Perhaps the title of this post seems ridiculous to some of you. But it will make more sense after reading a book by Gilsa Barcellos and Simone Ferreira of the World Rainforest Movement, focusing on the gendered impacts of monoculture eucalyptus plantations on women, and also the women-led protests against the eucalyptus industry in Espírito Santo, Brazil.

From my unfortunately brief scan of the document, some things stand out immediately:

1) There is a vibrant women’s movement centred around protesting agribusiness – in the words of the report, these women are diverse; “rural and urban, white and black, indigenous women and quilombolas“.

2) There may well be no such thing as an environmental problem that is not a social problem:

The next day, the protestors marched through the city of Pelotas. According to the women who led up the action, the impacts of monoculture plantations in Rio Grande do Sul are already visible: the serious drought in the south of the state, where eucalyptus production is most prevalent; the abrupt changes in temperature; the disappearance of the pampa or temperate grassland biome, leading to the loss of extraordinary biodiversity; the decrease in food production; the drying up of water sources; the pollution and reduced water level in rivers; and the reduced fertility of the soil.

Some cities have had to begin rationing water to make up for the shortage. In the regions most affected by monoculture plantations, there have been numerous cases of allergies and skin ailments provoked by the heavy use of agrotoxics by the corporations involved.

These regions have also seen the growth of poverty and unemployment, which has given rise to increased violence and an exodus from rural areas. In terms of specific impacts on women, in areas where monoculture plantations are most prevalent, an increase in prostitution has been observed.

Many families move to other areas in search of employment. In the meantime, new workers come to the region, drawn by the companies’ advertising campaigns and promises of job creation.

This has led to the formation of groups of workers without families, often unemployed, which has spurred the emergence of brothels around agroindustrial operations.

3) The protests may or may not be feminist – here’s one quote from a local activist group:

“The MMC believes in and fights for another kind of development and rejects the capitalist and patriarchal model that dehumanises men and women and destroys all life on the planet in the name of profits.”

But for others this is part of a broader women’s movement:

“Many non-feminist women legitimate their activities in pursuit of the common good by identifying themselves as mothers. In most contemporary cultures, that means they are responsible for preserving the health of their children, for which they depend on a safe environment. If that environment begins hurting their children, many of the women will act.”

4) The report does a good job of providing a full background to the current situation, and illustrating how it is an extention of and continuation of the historic oppressions in the region. It also dedicates plenty of space to words of the actual women affected:

“Before, we only worked inside the village, in the fields, with our children. You would go out to the fields and take your children with you, to plant cassava, and

corn… that’s the way it was. You would take a big piece of cloth to make a net, and you would leave your children there while you weeded and planted the crops.

Now the company has brought an end to all of that. Today most women have to go and work in other people’s houses, poor things. A lot of young girls have gone to look for work in Coqueiral. Before they didn’t need to, because there was work for Indians. Just a few days ago, my niece was saying, “This is all the company’s fault.” […] Aracruz doesn’t give people work, but there are some people who work for their subcontractors, but very few women. […] The company hires people from outside, it doesn’t hire Indians. There are some women working outside, but just a few, and some are also domestic workers. Domestic workers earn minimum wage or even less.” (MARIA LOUREIRO, Tupinikim and Guaraní Indigenous Women’s Commission, Tupinikim village of Irajá)

5) Local women say the changes to their societies caused by this industry (and historic changes mentioned above, undoubtedly), are encouraging violence against women – in the form of domestic violence, child prostitution, etc. For example:

“I suffered abuse by my husband. Twelve years ago… by my first husband,

because he was an alcoholic. He used to beat me, until I finally had to go to the police. My daughter was three years old at the time, and because he was a very violent person, he hit her. That’s when I went to the police. But that’s when I made the decision myself, because I saw that the police weren’t going to resolve my situation. That’s when I made the decision to break up with him. I kicked him out.” (DEUSDÉIA, indigenous name Yara-Tupã, Tupinikim and Guaraní Indigenous Women’s Commission, Tupinikim village of Pau-Brasil)

Anyway, this is a brief glimpse, really I would encourage everyone to go read the full report.

Photos by chrislang, shared under a Creative Commons license, and from the report