Forget single mums and absent fathers – the current spate of knife crime can be traced back to the so-called ‘real man’, argues Jennifer Drew 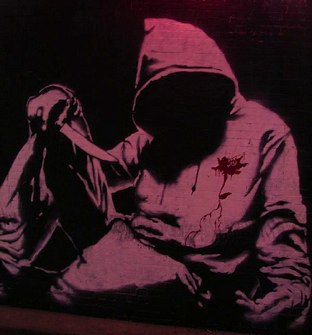 constant preoccupation with knife crime, and particularly the numbers of

But amid all this ‘moral panic’ generated by the media, there is one

glaring omission and that is the gender issue. On 29 May, The Metro (a

free London newspaper) ran with the front-page headline ‘Knife Crime: A Horrific Slice of Reality’. The story was

about the government’s latest attempt at tackling knife crime. In an

attempt to prevent young people from engaging in acts of physical

violence against other young people, the government has decided to

invest in a £3 million publicity campaign. This campaign will feature

what happens when a body is penetrated by a knife.

them from carrying knives. But, there are some glaring omissions. Firstly, such images will have no effect

whatsoever on the teenagers and youths who carry knives, whether it is to

protect themselves or to perpetrate violent acts against other teenagers

and youths. Secondly, a poster campaign does not even begin to address

the complex issues concerning increasing numbers of teenagers and young

And then, the gender of both perpetrators and victims has been deliberately

omitted. It is not ‘children’ but overwhelmingly boys stabbing and

murdering other boys not ‘youths’ and most certainly not ‘teenagers’.

But neither the media nor the government wishes to acknowledge this

glaring omission, because to do so would be to acknowledge the problem

is not gender neutral.