New review: The Diving Bell and the Butterfly

What happened to the women in The Diving-bell and the Butterfly in its transition from memoir to film, asks Melanie Newman? 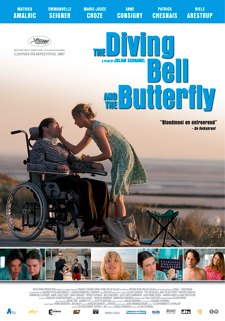 The film of The Diving-bell and the Butterfly was released in 2007. Based on a memoir by Jean-Dominique Bauby, editor of French fashion magazine Elle, it describes his life since he suffered a paralysing stroke at the age of 43. The film was directed by Julian Schnabel and written by Ronald Harwood, who adapted the book of the same name. It was nominated for four Academy Awards and won a BAFTA for best adapted screenplay.

Two scenes in the film stand out.

In the first, a doctor sews up the paralysed Bauby’s right eyelid to protect his damaged eye. He is unable to speak but we hear his anguished interior voice begging the doctor to stop; we see blurrily through his right eye as it is sealed up. Shown early in the film, the scene illustrates the ghastliness of Bauby’s situation. He is not only powerless to physically resist what is done to him, but unable to voice his terror. Although the doctor is aware that Bauby’s intelligence is unaffected and that he can communicate by blinking, he does not ask the patient whether he consents to the procedure. The doctor’s action – though medically necessary – seems inhuman.

In the second scene, Bauby’s girlfriend telephones him while he is alone with his ex, Céline, the mother of his children. Céline is a regular visitor at the hospital, but the girlfriend, Inès, has not seen Bauby since his stroke. After an emotional outpouring Inès

asks whether she should visit. Bauby blinks out his response as Céline – the only person on hand – translates. He tells Inès: “Each day I wait for you.” Silent tears trickle from Céline’s eyes and she jams the receiver down. The incident is an extraordinary demonstration of the power of the immobilised Bauby over the able-bodied woman.