The future of activism 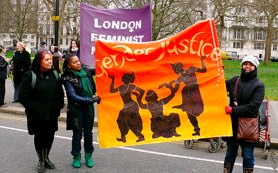 The government appears to have a policy towards protesters that bares more than a passing resemblance to a small sulking child singing “I can’t hear you!” with its hands firmly placed over it’s ears. In the protests running up to the Iraqi war, on 15 February 2003, between 750,000 (police estimate) and 2 million (demo organisers’ estimate) people marched through London. Considering the high level of political apathy, this was a truly impressive display of public outrage and was met with a resounding silence from the government. This makes the many politicians claiming to be concerned about the population’s lack of interest in politics and increasing voter apathy stink of hypocrisy.

This year 4,000 to 5,000 women marked International Women’s Day by walking, dancing shouting, drumming and singing their way through London to celebrate womanhood and highlight the inequalities and dangers women still face. Not only did the government not deign to respond, the mass media also seems to have been looking the other way that weekend. Even The Guardian, which ran an International Women’s Day special, felt that it was more important to highlight a few women who have excelled in their various fields (and the obligatory beauty articles and the 10 hottest men lists) and ignored the uprising of several thousand ‘every day’ women marching through the rain to make their voices heard. I agree that there are so many protest movements it would be impossible for the government to acknowledge them all. If a government statement was released every time there was a ‘free Tibet’ protest then they would lose all impact. It just means we have to organise ourselves better to ensure we are speaking with one voice at one time. After all, look at what the Olympic torch protests have achieved for raising the profile of the Free Tibet movement worldwide.

When the government ignores the perfectly valid concerns of active citizens, what does that say about the state of democracy in Britain and what are the options left to us to make ourselves heard?

During the Iraq war protests, I was studying in Manchester. I joined other protesters who couldn’t go down to the main London protest. We ended up sitting across one of the main roads blocking the traffic. We obviously did not have a permit for this protest and for a brief period we caused an impressive amount of chaos. However there weren’t very many of us so we weren’t able to keep it up for very long.

Although I am not advocating breaking the law, I can’t help but wonder what would have happened if the protesters in London had the same idea? If two million people had sat at the intersection between Oxford Street and Regent Street bringing traffic to a standstill and interrupting the retail business of the city? If on International Women’s day 4,000 to 5,000 of us had sat outside New Scotland Yard or Holloway Prison. Would the government and broadsheets deign to notice us and acknowledge our concerns then?

Since Banksy, graffiti has become far more acceptable and more recognised as the modern art form it is. Although it is telling that more attention seems to be given to how much his art is worth than any of the actual political messages. I firmly believe that using art en masse to convey a message is far more effective than lecturing people or typing ourselves into some kind of repetitive strain injury on the internet. What if our cities were overrun with concerned citizens spraying out our awful rape conviction rates in public (but appropriate) places?

I admit on a small scale it wouldn’t do much good (not least because no one could use it to make a profit) however what if there were hundreds of us doing something very similar in an organised and methodical way? I do not think making graphic and disturbing art depicting rape would be a positive or helpful thing as it would just upset some people, sexualise it for others – but something aimed at making our streets literally shout “I’m mad as hell and I’m not going to take it any more”, posters, stickers or stencils. You don’t have to be Banksy and have great artistic skills to get the message across.

During A Levels my required reading for English included: Beloved by Toni Morrison, The Dolls House by Henrik Ibsen, Jane Eyre by Charlotte Brontë and several of Sylvia Plath’s poems. My teachers were two women in their early 30’s and 40’s and my class was a relatively small one – eight of us all female. Yet during my entire two years at college the word feminism was not mentioned once. Quite how this was managed considering the reading list I honestly can’t imagine.

Until two years ago, I not only would not have considered myself a feminist, I’d have been offended by the thought. Somehow I’d got the impression that a feminist was a man-hater, probably with penis envy – does this sound familiar to any of you? How can we prevent young girls going through school now with the same gaps in their education? I was pleased to see a few young children at the Million Women Rise event, but there was only a very small number of them. Why hadn’t any schools, colleges or youth centres organised trips there?

We are the less active daughters of the second wave feminists, partly because we have the internet which makes us feel active

I’ve started by buying books such as Full Frontal Feminism by Jessica Valenti and Female Chauvinistic Pigs by Ariel Levy for the daughters of friends and family, and making sure to discuss current events with them. It’s enough to tempt someone to start vandalising public spaces at child height with the words “Mummy, what’s feminism?”. This still isn’t anywhere near enough though, and is on too small a scale to have any real impact.

What can we do?

Creating women-only spaces, gigs, and comedy nights is a good way to get momentum into the movement and most importantly a sense of solidarity. I don’t have any big answers to this problem – I wish I did. Although I think if we want to reverse the backlash against feminism much less make any further gains we need to be better organised with more focused goals.

In some ways we’re blessed with the internet, which makes it very easy to contact and organise people quickly and to meet other people that share our views. However I worry it makes us lazy, as when we’re filled with righteous rage over a misogynistic advert or the dreadful conviction rates to rape the world over, we head straight to chat rooms and online blogs and have a rant to other mainly like-minded souls, we are preaching to the converted in many ways. Then once we’ve purged it from our systems, we have a tendency to get on with our day. We are the less active daughters of the second wave feminists, partly because we have the internet which makes us feel active. The second wave got out there and made society take notice. This was back when feminism was newer and therefore more interesting to the media of course.

The same tactics today would either not even register on the radar or might get us arrested under the 2005 Terrorism Act if we gave into frustration and took part in civil disobedience.

There’s got to be a better way, any ideas?

Photos by the editor and gaelx, shared under a Creative Commons license

Deborah McAlister is an avid collector of skin ink, horrific with money. She has ADHD, which makes her random, maybe this is why she can’t stop messing with her hair. She is very opinionated but doesn’t have to be right and enjoys a good argument