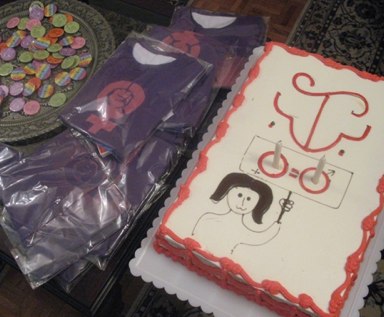 We’ve written about Change for Equality a few times here on The F Word – it’s an activist group of the Iranian women’s movement which is campaigning for an end to laws that discriminate against women. They are responsible for the One Million Signatures campaign.

Change for Equality has an excellent section called ‘face to face’, full of posts such as Hoda Aminian’s about housework and Parisa Panahi talking about gathering signatures in a shopping mall in Zanjan.

Now they’ve posted up a massive collection of photos from the second year of the campaign. Many of the photos and descriptions could fit any group in the UK – meetings convened, agendas set, feminist cakes baked (see photo). But mixed in are matter-of-fact entries about arrests, imprisonments and more. The photo gallery is a great celebration of the work the women and men of the campaign have been doing – and the risks they have been taking.