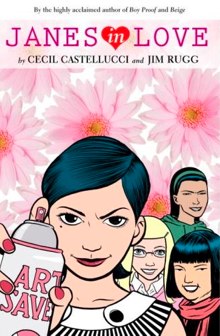 Jane Beckles lives in a fictional small town in the US called Kent Waters, as told in Janes in Love, a graphic novel written by Cecil Castellucci and drawn by Jim Rugg. She attends Buzz Aldrin High, and collects together a group of friends calling themselves The P.L.A.I.N Janes – standing for People Loving Art in Neighbourhoods – and the Janes use public space to create artworks with the aim of improving the world by making it beautiful.

As Jane Beckles (or ‘Main Jane’) puts it: “Making art is my love letter to the world.” These art works have been labelled vandalism by the local authorities, but the Janes themselves call them ‘art attacks’.

The P.L.A.I.N. Janes are a ‘misfit’ gang of four girls (and one gay male), and, like the Spice Girls, the readers will be able to choose which Jane they identify with most. As well as Main Jane, there is the scientific Jayne, with two dads and a crush on a fellow science-geek who she isn’t brave enough to even talk to. The sporty Polly Jane isn’t intimidated by anything, especially not boys, and ‘Theatre Jane’ pines ‘romantically’ after professional actor Rhys (if I was being uncharitable I could call it stalking). James has no identity beyond token gay male, and no love interests either – he even says the line: “Oh for one cute gay boy here at Buzz Aldrin!”

The book emphasises the importance of friendship and teamwork, and doing the right thing, and sticking up for what you believe in

Janes in Love follows directly on from The P.L.A.I.N. Janes (but I don’t think it is necessary to have read the previous book – I managed to pick up the back-story from the current story itself and the Amazon description of volume one), opening with Damon, the boy Main Jane is in love with, suspended from school after taking the blame for a New Year art attack.

Main Jane is also thinking about Miroslaw, the boy whose life she saved during a terrorist bombing that took place in book one. He is in Poland, and in a relationship with Gita, an artist; they exchange letters and artwork over the course of the story. At the same time, Main Jane’s mother, after an anthrax attack in Metro City kills her college friend, stops leaving the house, causing Main Jane’s father to start staging family meals and camping out in the front yard in the hope of tempting her back out into the world. This is another reason for Main Jane’s art, she says: “I want to make the world beautiful … so that my mom can remember it is.”

I am clearly not the target audience for this book, which is aimed at 13-year-old girls and younger; for whom teenager-hood is still an esoteric and exciting future. Anxiety, heartbreak and indecision rule these girls’ lives (except for Polly Jane, who, in the words of Theatre Jane, is “a heartless brutish beast”); one frame – a close up of Main Jain’s tousle-haired, tear-streaked face, holding a flower without any petals, almost made me laugh out loud it was so saturated with angst. Not the intended effect I’m sure!

Saying that, there is much emphasis in the book on the importance of friendship and teamwork, and doing the right thing, and sticking up for what you believe in. When the P.L.A.I.N. Janes win an art scholarship to turn a disused patch of land into a community garden, but are turned down by the town council (including the vindictive sheriff who is vociferous in his condemnation of their art work as vandalism), they all pull together to win through in the end.

This emphasis on friendship, however, risks being undermined by the girls’ constant angsting over boys. There are many sections of this book that wouldn’t pass the Bechdel test – also know as the Bechdel/Wallace test:

1) It has to have at least two women in it, who

2) talk to each other about

3) something other than men.

Three of the four Janes spend pages talking about the boys they like but for various reasons can’t or won’t approach. Only Polly Jane bucks the trend by asking out directly the boy she likes.

All the real dangers and fears of being a teenager have been removed from the story: there is no domestic violence, no pressure to engage in unwanted or unprotected sex (no sex at all), no drugs, no gun or knife violence, no racism; even the mean girl is a secret ally, and the supposed misfits hang out with the basketball team after school. The dangers have been externalised into terrorist bombs and anthrax attacks, and in the process made distant and impersonal. Even these external threats do not feel real, and the whole thing is oddly bloodless. None of the threats seem to have any real consequence, despite the amount of worry the Janes expend on them. Getting caught by the sheriff when perpetrating an art attack results only in community service (can small-town US sheriffs hand down sentences directly like that? I don’t know).

The artwork in the story is good, the girls are not drawn in the hyper-sexualised way of some sequential art; there are no giant eyes, no wasp-waists or puffed-up lips. However, the narrative voice over slows the story down to a crawl in places, with too much telling and not enough showing.

As I said before, I am not the target audience for this book – although it did hold my interest well enough. I’m sure lots of girls will love these stories, and, with the over-all emphasis on being good to each other, from a feminist point-of-view, they won’t do any harm.

Sarah C L is a sequential art fan, currently re-reading Watchmen and worrying about what the film is going to be like, and also waiting for the next Finder graphic novel to come out