Fundraiser for Edinburgh Reclaim the Night! 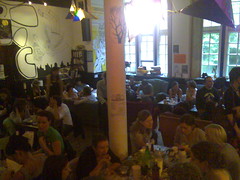 Reclaim the Night Edinburgh is holding a fundraiser on 30 September, with music (Fool for a Pretty Face, Victoria Bennett), feminist comedian Liz Ely, mini-massages and a clothing swap.

Starting 7.30pm at the Forest Cafe (3 Bristo Place), entry is free but donations will go towards running costs for the march, which is on International Women’s Day next year – 8 March:

In Leeds, 1977, the police responded to the ‘Yorkshire Ripper’ murders by advising all women in the city to stay at home after dark. Angered by the suggestion that male violence should be dealt with by restricting women’s liberty, the women of Leeds took to the streets & marched to ‘Reclaim the Night’, bearing banners reading “No curfew on women – curfew on men!”

Thirty years later, I doubt there will be any woman reading this article who does not regularly feel afraid to walk home after a night out; who isn’t reluctant to answer her door after dark; who doesn’t think it foolish to go for a solo run along the Water of Leith; whose heart doesn’t beat a bit faster when collecting her vehicle from a deserted car park.

At the same time as it goes unchallenged that women should live in fear of male violence from strangers on the streets, the majority of people remain ignorant of the fact that most violence against women is perpetrated by men they know, with one in four women experiencing domestic violence over their lifetimes and two women a week murdered by a male partner or former partner.

On International Women’s Day, 8th March 2009, Reclaim the Night Edinburgh will be holding a march & rally with the intention to:

The Universal Declaration of Human Rights states that all human beings have the right to freedom from fear and to freedom of movement, & to an ‘effective remedy’ for acts violating these freedoms. Reclaim the Night Edinburgh is a chance for women of all ages and backgrounds to take a stand against the continuing abuse of their basic rights.

Photo of Forest Cafe by lamalgama, shared under a Creative Commons license