“If a girl goes to a man’s room and takes her clothes off and engages in sexual activity, should she be charged with inciting the crime of rape if she then says no?”

It’s a tricky one, isn’t it, navigating the minefield that is modern sexual relations? The conundrum above was posed in the comments section of The Times’ website, in response to Helen Mirren’s reflections on having been raped. In case you missed it, Dame Helen seems to think that being “locked in a room and forced to have sex against my will” constitutes “one of the many subtle parts of the men-women relationship that has to be negotiated and worked out between them”. It’s not quite my definition of subtle, but I guess language is a funny thing. Anyhow, it’s the incitement to rape thing I’m more worried about. I reckon I’ve done it loads, albeit without actually being raped..

The alternative – not to act on your sexual feelings, to be unable to say yes in case you can’t ever say no again – that is the thing that really scares me

Seriously, though, I’m not a lawyer, so I don’t know how cases of incitement really work. I wasn’t aware that you could incite crimes against yourself, although once you start thinking about it, there’s loads of ways you could extend this (being annoying as incitement to assault? Being annoying and rich as incitement to mugging? Being Merlin from Northampton as incitement to … actually, I’ll need to think about that one). Of all of these, though, I think incitement to rape is the one you can really run with. Why stop at the definition offered above? Just look around you – heterosexual women are inciting men to rape all the time: all you need to do is suggest you want to have sex, then change your mind. In the olden days you’d just get called a prick-tease, but it’s all about litigation these days and you’ve got to move with the times.

I’m quite interested in the concept of “inciting the crime of rape”. For one thing, the connection between the actions given this tag, and what motivates the actual crime of rape is more than a little tenuous. And for another, everything that supposedly “incites” men to rape you is loads of fun. For many a heterosexual woman, what’s not to love about dressing up, going out, eyeing up men who take your fancy and doing naughty things with them, should said men share your interest? Apart from the old “it leave you hollow inside” thing, which I’ve never really got, it all sounds to me like making the most of being a human being with passions and desires, however frivolous and fleeting they might be. The alternative – not to act on your sexual feelings, to wait to be uncovered, to be unable to say yes in case you can’t ever say no again – that is the thing that really scares me. That is the thing I would not want a daughter of mine to ever do.

I realise that in saying this, in addition to sounding regrettably like Rizzo in Grease, I’m going against the flow when it comes to what constitutes dishing out “sensible” advice to young women. As India Knight writes in her appallingly-titled article, also for The Times, ‘Women who really do ask for it’, “there’s no such thing as a free lunch”:

In the real world there are predatory men with demented, damaged ideas about women. There are confused men who don’t understand the mixed messages many of us sometimes give out inadvertently — especially if we are young and confused ourselves, and have spent all night flirting massively only to shriek with shock and disgust if the object of our flirtation dares to lunge. There are men who believe what they see on telly, online and in their silly little magazines — that all women, everywhere, are gagging for it.

The alternative, as Knight and other see it, is for women who are interested in men to either accept that they will be viewed in such a way or to act as though they’ve never gagged for it in their lives. It sounds simple enough. Apparently, if you leave no space for ambiguity, no one will get confused. This is, however, the riskiest suggestion of all. If anything is confusing, it’s asking women to behave as though they are not complete human beings, then berating them for letting the mask slip.

It’s about time we realised that we do not reduce instances of rape by asking women to be less than they are, thus reinforcing the idea that they are indeed the sexual objects that any potential rapist assumes them to be, passive orifices that are either available or not, dependant on “the signs”. What is needed is the greater acceptance of women as sexual subjects, active participants in shared sexual acts, human beings who can want to have sex but not with you, who can want to have sex with you but not right now, who can want to have sex with you right now but not that way. For this to be possible, women who behave like active sexual beings need to be a visible presence in society.

I am not suggesting that we all hitch up our skirts and head off to the nearest street corner with a can of White Lightning, before offering ourselves to the nearest passing male in a random act of feminism (unless you particularly want to). I am, however, suggesting that a refusal to use the tools available to us to communicate sexual desires and needs panders to the belief that women are sexual prey, men sexual predators.

Rape is viewed as a little blip – if a woman sometimes wants to have sex with you or indeed with someone else, it’s far, far too much of an ask to tell the difference between sometimes and always, or between you and another person

To deny any subjective variation to our own sexual responses – to act as though all we can do is withhold or give – creates a huge chasm between how we present ourselves as sexual beings and how we actually experience sex.

It makes a woman suddenly saying no to sex seem like cruelty or spite, the withdrawal of an agreement. If men are to understand that it is nothing more than just not being up for it any more, they need to know that women can be up for it in the first place. Women such as Mirren and Knight pretend this is too complex and subtle for some men to cope with (Merlin from Northampton being one of them, I guess). Yet such men inhabit the same world we do and are shaped by the same cultural currents and contexts we are. If they can be influenced by “what they see on telly, online and in their silly little magazines”, they can also be influenced by women backing them up in the delusion that they just can’t help themselves (whereas the object of their attentions apparently can and is just being petulant).

We’re at a point where an act of rape is viewed by some not as a crime, but as a lapse in etiquette, a faux pas, a little blip that’s explainable by the fact that if a woman sometimes wants to have sex with you or indeed with someone else, it’s far, far too much of an ask to tell the difference between sometimes and always, or between you and another person.

To play along with this view of things is dangerous indeed. Whether you call it “asking for it” or “incitement to the crime of rape” (and of course it shouldn’t be called either), conducting yourself as a real live person who responds to different desires, people and situations in relation to sex as much as in relation to anything else is, I think, essential, at least if we wish to reduce the number of men who think sex is not a shared act but something women offer them – and therefore something which they can take should the offer be “unfairly” withdrawn. Sex is not a weapon; if it’s not shared, it’s not really even sex.

So this is, in essence, a call to action. Go out there and express your sexual desires. Wear what you like *. Sleep with someone if you both want it, say no if you don’t. Let someone down if you change your mind, just as he may do the same to you. This is not being irresponsible or taking undue risks. It is refusing to accept that female sexuality is something that can be sacrificed to avoid disappointing others. And it also challenges the way in which violent responses to such disappointments are deemed acceptable. The only way to stop people being confused in this apparent minefield is to ignore all calls to be someone you’re not.

*I write this as someone who, upon reporting a sexual assault, was asked whether it was really possible since my pinafore was too long and would have got in the way. If only I’d worn the proverbial miniskirt… 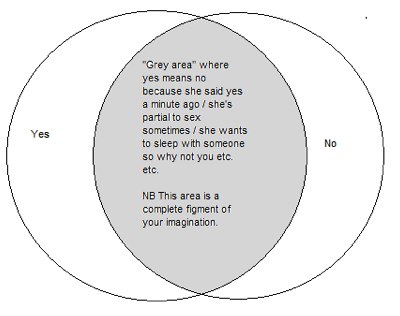