So, you really think we’re stupid, do you? 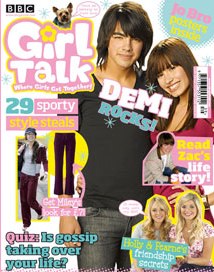 There are quite a few magazines available in the shops aimed at girls of around the ages of seven to 12. These magazines suggest that girls only be interested in certain topics, e.g. fashion, celebrities and some pop stars selected by the magazines themselves.

For example, I love Leona Lewis but I still find these magazines pretty boring. I like Rihanna but I also love writing stories. I’m now going to give two examples of the magazines’ attitude:

In the film High School Musical, the character of Gabriella Montez was brilliant at maths and science and enjoyed studying and she got called a ‘brainiac’, and also she loved singing. This appealed to me and I’m sure it appealed to many other girls who saw the film. However, the magazines, when referring to the character and Vanessa-Anne Hudgens the actress who plays her, always use words like “cute”, “smiley”, “girlie”, and “shy sweetie”. They ignore the fact that she was also really good at studies and things in the film.

Another example of how these magazines try to convince girls of the boringness of being clever is given by Girl Talk, which is produced by the BBC. In one of their issues, they have a quiz for you to take, called ‘Find out how wild your school year’s set to be’. If you’re interested in school work and do well in class, you get less points, whereas if you find it all boring you get more points. One question was set out like this:

Circle the words you prefer…

People can like what they do like, so why make them feel defeated by giving them less points for liking certain things? It doesn’t make any sense, and it’s very mean and putting pressure on you. And how can you compare homework to giggles?

Another question in the quiz says “study this picture and choose the girl you most like the look of”. You then get different numbers of points for choosing different girls, who are only dressed slightly differently from each other! The girl that you get the most points for choosing has long blonde hair and has the shortest skirt.

I think this is bad because people dress differently on different days, and isn’t fair because, again, your style is your style, and no-one has the right to change it.

The quiz also suggests, in one of the results, that studying cannot be fun and, what’s more, it discourages you from ever finding it fun by saying “for you, study comes first, THEN fun”. I think this is making you feel that you must not ever like studies or school if you want to have fun, which could affect the job you get and the life you lead in the future.

The magazines also often make assumptions that you have, do and enjoy certain things. What’s more they force you to be – and assume many people already are – mainly interested in these things in their lives. For example, in W.I.T.C.H, one of these magazines, there is another quiz which you are supposed to answer about yourself. One set of questions says:

How often do you play computer games?

What kind of console do you play games on?

All this makes girls feel that they don’t get the things all other girls get, even when this is not true. It puts pressure on you, and makes you spend money which you could otherwise spend on much more exciting things.

I really think it’s time people picked all these ideas up and started producing magazines for girls which are more fun, more exciting and on more interesting topics.