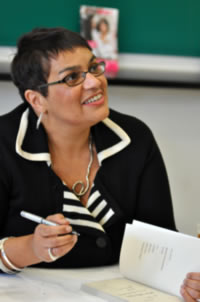 Since its first incarnation in 2000 as a book reading event, the York Lesbian Arts Festival (YLAF) has grown to incorporate workshops, discussions, music, comedy and dancing. It’s become something of an institution, a solid fixture in the calendar for literary ladies.

YLAF is the only lesbian literature festival in the UK, and possibly in the whole of Europe. And so, on a breathtakingly cold weekend in October, book-lovers from Britain joined independent publishers from Poland, literature academics from Latvia and hopeful first-time authors from the Netherlands to descend on a small northern town more famous for Vikings and railways than lesbian fiction.

In previous years YLAF has hosted Sarah Waters and Rhona Cameron, but the star attraction of this year’s event – L Word writer and actress Guinevere Turner – mysteriously pulled out just days before the festival, much to the disappointment of many fans. But the show must go on, and festival-goers consoled themselves by flocking to readings and book signings by the more than 35 authors in attendance, including Jackie Kay (see photo above), Stella Duffy and Val McDermid (see photo below).