New review – Out of Place: Interrogating Silences in Queerness / Raciality

debi withers reviews a collection on the intersection of race and queer politics, which slips between first-person narratives, manifestos and academic tracts 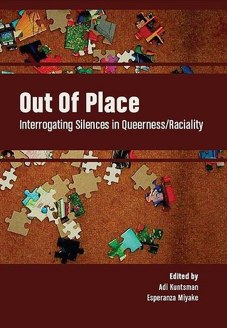 Out of Place: Interrogating Silences in Queerness / Raciality is the latest book from Raw Nerve, the independent feminist publishers based in the Centre for Women’s Studies at the University of York. The collection of essays is based on the papers from an academic conference of the same name, held in Lancaster in 2006, and attempts to cover a wide range of perspectives that examine the intersection of queer and anti-racist writing, experience and activism.

The strength of the book lies in the number of different voices in which these critiques are articulated, ranging from academic high-theory, to ethnography, to activist writings and personal testimony, manifestos and the performance diary of a gender queer drag queen. The book is divided into four sections, which address a selection of critical issues relating to the War on Terror, queerness, race, embodiment, visuality and translation. This plurality of forms is in line with Raw Nerve’s commitment to publishing books and pamphlets that do not fit neatly into academic, activist or popular writing, but instead seek to move across critical ‘genres’ and disciplines by creating a multi-voice collection (see, for example, The Feminist Seventies which similarly mixes testimonies and analysis). This really brings the energy of the conference itself into the collection, as many different lively debates are presented for the reader to engage with. For what singular voice or critical style could do justice to the immense knot of questioning and critique that needs to be mobilised in relation to the subjects of queer, race and their intersections?