All about Club Des Femmes

[The Club des Femmes collective got in touch, after I implied their mission statement was a bit enigmatic when I posted about their screenings at the ICA this month. They’ve come back with this great summary of what Club des Femmes is all about – Jess]

Hello – Club des Femmes are a queer-feminist film festival mostly based in London – although we put on some film screenings in Berlin last year. We set ourselves up because we decided that, in London, apart from the London Lesbian & Gay Film Festival, there wasn’t much year round alternative queer programming, especially from a feminist perspective. We thought London deserved more!

We held our first festival in June 2007, in conjunction with Pride, at the Curzon Soho in London with a week long festival, screening works by Vivienne Dick, Lizzie Borden and Sadie Benning among others. We were delighted and surprised to see so many people came – 250 in fact. Unbelievable! Our mission then, which still stands today, is to re-contextualise filmmakers (some you may have heard of, some not), video artists, writers, actresses and avant-garde scenes and movements from a more radical contemporary queer-feminist position. The programmes are specially curated according to what we feel like doing at the time and what’s around – for example, in January 2008 at the ICA in London we dedicated a whole film programme to Kathy Acker, the American radical writer and sex-positive feminist as it was ten years since her death. Ali Smith came to do some readings from Acker’s work and again we screened films to a sold-out audience. Later on in May – we were thrilled to present the doyenne of dyke experimental filmmaking Barbara Hammer, in person (on her way to teach in Switzerland), at BFI Southbank with her new film about Claude Cahun Love Other. We did a fabulous post screening Q&A with her, or so our friends tell us!……… Oh, and then there’s our Dykesploitation screenings – where we re-claim a film or actress that has been, it seems to us, neglected for far too long. Kristy McNicol was nominated as our lesbian icon #1 and we screened the cult classic Little Darlings and relived the dream. It was perfect. 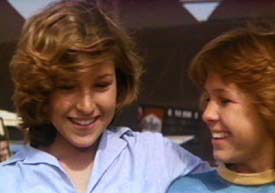 As we do lots of others things apart from Club des Femmes – sometimes we don’t have as much time to devote to the festival as we like – but for 2009 we have made it our goal to put on lots more events in and around the UK. So please, if you’d like us to put on films, do Q&A’s, and arrange parties near you – get in touch with us. We’re a very welcoming bunch of dykes.

Our next event is going to be on 17th January as part of the London Short Film Festival at the ICA in London. The programme is called Body of Work and we will be screening work by artists such as Jayne Parker, Mona Hatoum and VALIE EXPORT and you can find all the information about it on our website www.clubdesfemmes.com

ps. Where do we get our name from? The 1936 French lesbo classic Club de Femmes – check it out