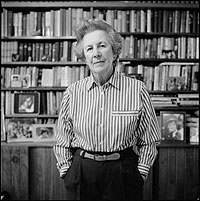 According to The Times’ obituary:

Intelligence from those visits was passed to supporters of the antiapartheid struggle around the world, Lord Healey recalled. “She was very committed to the cause of ending racial segregation and was effective,” the former Labour Chancellor said.

Mr Mandela wrote in his biography, The Long Walk to Freedom: “It was an odd and wonderful sight to see this courageous woman peering into our cells and strolling around our courtyard. She was the first and only woman ever to grace our cells.”

Mrs Suzman waged an often lonely and tough parliamentary battle over 36 years. Her attacks on the apartheid regime led to her being given the accolade “cricket in the thorn tree”.

I loved reading about her quick wit in parliamentary debates. She sent the minister of law and order a postcard from the Soviet Union, saying, “You would like it here. Lots of law and order.” Once she told a government minister to go into the black townships and see their appalling conditions for himself. He would be quite safe, she said, if he went “heavily disguised as a human being.” In a famous exchange a certain minister shouted: “You put these questions just to embarrass South Africa overseas.” To which she coolly replied: “It is not my questions that embarrass South Africa – it is your answers.” When an Afrikaner in Parliament sneered at her Jewish roots and asked what her ancestors were doing when his were bringing the Bible to the “savages,” she snapped, ”They were writing the Bible.”

But for a really in depth profile, check out this episode of the BBC’s Woman’s Hour made last year, to mark Suzman’s 90th birthday.