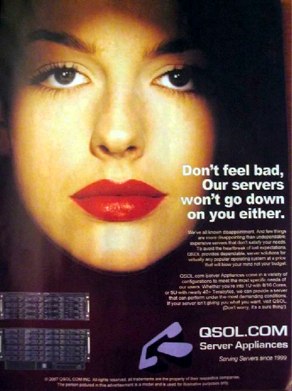 Sniggering sexism in the IT industry is endemic, but that’s no reason it should be tolerated. In 2007, server manufacturers QSOL.Com re-published an ad first shown in 2000: a photograph of a striking brunette with red lips. The text read: “Don’t feel bad, Our servers won’t go down on you either.” The ad was torn to pieces by feminist commentators, but many men just saw the ad as “genuinely funny”. “I’ve seen stuff like that in men’s magazines,” said one commenter. “Where’s the harm in it?”

In the mid ’80s, US universities kept a close check on the number of women working in IT and were alarmed to see numbers decline year on year. UK universities were also worrying over those figures and, by 1990, women occupied just 30% of all IT jobs. Analysts Gartner quoted depressing figures during a 2007 conference: the number of women in IT, measured as a percentage of the total IT personnel pool, declined from 42% in 1996 to 32.4% in 2004, with no noticeable progress in the number of women in professional or management ranks. By 2008, just 250,000 UK women were employed in IT according to the British Computer Society, a professional body for IT workers. Research published by the BCS in November showed that 2001 was a peak year for women in IT. In the six years following this peak, 37,000 women left the industry. But Ada Lovelace, a 19th Century analytical programmer, is helping to recruit women back into the profession with a proposed annual Ada Lovelace Day, on the 24th March.

“Ada Lovelace Day is an international day of blogging to draw attention to women excelling in technology. Women’s contributions often go unacknowledged, their innovations seldom mentioned, their faces rarely recognised,” says Suw Charman-Anderson, the tech-savvy media commentator proposing Lovelace Day. “We want you to tell the world about these unsung heroines. Whatever she does, whether she is a sys-admin or a tech entrepreneur, a programmer or a designer, developing software or hardware, a tech journalist or a tech consultant, we want to celebrate her achievements.”

Lovelace was an 19th century analyst with a bent for what would later become ‘programming’. According to Charles Babbage, the man behind the ideas of the programmable computer, she worked in several capacities with the inventor and mathematician on his computing engine. In Passages from the Life of a Philosopher, Babbage wrote that Lovelace excelled in “the algebraic working out of the different problems, except, indeed, that relating to the numbers of Bernoulli, which I had offered to do to save Lady Lovelace the trouble. This she sent back to me for an amendment, having detected a grave mistake which I had made in the process.”

The programming language ADA would be named after Lovelace by a Honeywell team working for the US Defense Department in the late ’70s. By then, women had succeeded in computing for decades. They played pivotal roles in the Bletchley Park code-breaking teams of the Second World War and the 1943 ENIAC project, a “giant electronic brain” which could compute artillery firing trajectories, was programmed by Betty Jean Jennings and Fran Bilas.

The question is why so many 21st Century women leave IT. “Women feel invisible, lacking in confidence and unsure how to compete for attention with the men around them,” Suw Charman-Anderson says. “The objectification of women is bad enough when it’s done by the media, but when it’s done by a conference organiser or tech commentator or famous tech publication, what message does it send? Nothing but ‘You will never be taken seriously, but we might take notice of you if you’re hot.'”

Many female graduates hop into a decent IT job with a blue-chip corporation. At first they go with the largely masculine flow, then six months into the job, they become disillusioned with the boys vying for the C.V. Prize for Fiction and cheating on their Microsoft exams. Further up the pay-grades, management positions rarely come their way, their decision-making is often undermined, or women in management are ignored and consigned to a backwater. At the end of their second year, many women in IT feel they’ve walked into some weird club for geeks, where getting the next promotion seems to depend on how much can be drunk after work on dress-down Friday, and how prepared they are to blag their way up the pay scale by inventing skillsets and embroidering C.V.’s.

Many women don’t, and won’t, stay in an industry so juvenile and testosterone-driven. After two or three career moves, many women give up IT altogether. The glass ceiling for too many female IT professionals is despairingly low.

I was four years unemployed. I had hundreds of part-time jobs, but couldn’t get a full-time job at all. The people at job agencies were not interested even to interview women for IT positions

Is sexism so rampant in IT? It’s certainly prevalent in many areas of UK business, but IT seems to bring it to the fore. A search of the UK online red-top IT news service The Register brought up 27 references to “jubs” (slang for breasts), along with countless misogynistic references to women.

In September 2007, Tim Berners-Lee, inventor of the World Wide Web, ran into a storm over his comments about sexism in IT. “A culture that avoided alienating women would attract more female programmers, which could lead to greater harmony of systems design. If there were more women involved, we could move towards interoperability. We have to change at every level,” he said. The issue was covered by online news service ZDnet. A typical comment from a female respondent was : “I was four years unemployed. I had hundreds of part-time jobs, but couldn’t get a full-time job at all. The people at job agencies were not interested even to interview women for IT positions, especially helpdesk or service.”

ZDnet commented: “According to Berners-Lee, a culture exists where women can be put off a career in technology both by stupid behaviour by some male geeks, and by the reactions of other women.”

Is sexism and ‘laddish’ behaviour really to blame? Financial analysts Gartner think so. Moreover, such behaviour deters women from entering the profession. Mark Raskino, a Gartner fellow and research vice-president’s opinion at the Gartner Fall Symposium in 2006 said: “In some cases, the profession has become viewed as ‘a boy thing’ for computer nerds and geeks.” Girls eliminate consideration of a job in IT as soon as their early teens, which is when, according to Raskino, many girls are beginning to choose their lifetime career paths.

In 1989, a letter from Bank Street College of Education’s Centre for Children and Technology was published in the New York Times in a response to a feature on the gender disparity in computing. Their points were that boys were raised on mechanical technology, and thus saw computers as objects to be tinkered with, while women focused on the social aspects of computing:

“Men and women tend to define their relationship to technology differently. As you assert, many men get involved with the computer as an object, as a thing, enormously appealing in itself. Women are more likely to see their work in a larger context in which they contribute to other people’s enjoyment and constructive use of technology. When the men we interviewed talked about long-term projects, many envisioned an environment in which technology is omnipotent, having taken over many of the social functions performed by people. Many women, however, expressed a desire to solve social problems with technology, conceiving it as a tool to improve life.”

Perhaps there lies the answer. The IT industry is young, inexperienced, and too often staffed by geeks with a limited and uneducated sexist outlook, who like playing with expensive toys. No, we didn’t say that. Tim Berners-Lee did.

We can give (almost) the final word to Suw Charman-Anderson, who said: “Ada Lovelace was one of the world’s first computer programmers, and one of the first people to see computers as more than just a machine for doing sums. She wrote programmes for Charles Babbage’s Analytical Engine, a general-purpose computing machine, despite the fact that it was never built.” Her actual contribution is still ‘debated’ by historians today.

Just about sums up the entire IT industry thing? No wonder so many women leave.