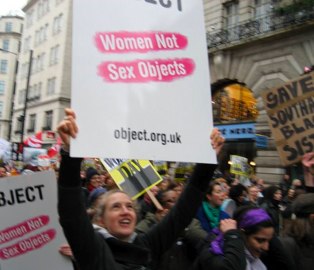 A recent feature in The Times labelled protests against the Miss University London beauty pagaents “old fashioned”. But, argues Sandrine Levêque, if anything campaigns against the objectification of women and girls are more relevant today than ever

I should probably say from the get-go that as of last month I own a duffle coat. The coat was a gift from my mum, although I should have perhaps checked The Times’ Style section first to see if it ticked the box of ‘accepted feminist outfit’. Apparently it doesn’t. In ‘The new feminists: lipsticks and pageants’, a Times Style reporter argued that, in contrast to so-called “old feminism” – epitomised by “angry young women in duffle coats” protesting outside Miss University London beauty pageants, today’s re-branded version of the f word is rejecting objectification campaigns (and their apparent duffle coat associations) in favour of chic glamour.

I don’t need to spend much time on the piece’s contradictions – see Jess’ post here for an interesting discussion of them. The most obvious example is that, for an article critiquing “old feminists” for allegedly judging women on the basis of their appearance, comments about the outfits of political activists are more than a little hypocritical – and say a lot about attitudes underlying the piece.

Rather, I think it’s important to set the record straight. At best the article gives a lop-sided vision of what feminism today means to women and men campaigning for an end to sexism and full women’s rights. I’m not suggesting that the ‘wrong kind’ of feminism was showcased. It is of fundamental importance that women have choices – choices that have been historically so repressed. So of course there is no ‘right’ feminism. But equally it is right that all views are given a fair hearing, which is what was missing from this article.

And the fact is that for many women and men, beauty pageants and objectification are issues worth campaigning on. Indeed, 2008 was marked by a helluva lot of activism linked to these issues. Describing the resurgence of this activism, The Times suggests readers could be forgiven for believing they had “woken up in 1978”. The obvious implication being that such protests are outdated relics from the past.

Well last time I checked, many of the issues that feminists campaigned on in 1978 are still alive and kicking today.

In 1978, women were under-represented in fairly paid employment, politics, law and education, and faced extraordinarily high levels of violence.

Fast-forward 30 years or so. In 2009, 75% of workers paid a minimum wage are female, 80% of MPs are male, 91% of high court judges are male, 92% of university vice-chancellors are male, 96% of FTSE 100 company directors are male and one in three women will face gender-based violence in her lifetime. In the words of a cheesy blockbuster: Houston, it looks like we still have a (sexism) problem.