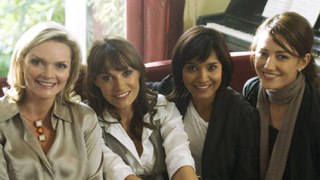 New review: Sex and the Substitutes

Was 2008 the year of the girl gang? Sex and the City made a come-back at the cinema, while a whole host of substitutes on the small screen queued up for a piece of the action: Mistresses on the BBC, Cashmere Mafia on ABC in the US and Candace Bushnell’s Lipstick Jungle on NBC. So what’s behind pop culture’s current obsession with all-female ensembles? Cynics might mutter ‘ratings’ and there’s certainly a healthy audience for this kind of drama; Mistresses regularly pulled in around 5 million viewers and although Cashmere Mafia hasn’t been renewed for a second season, it was sold to eight countries around the world. To recreate the zeitgeisty feel that made SATC so popular in the late 1990s, these dramas must have found something relevant to say about women today… but what? With female-focused dramas still so few and far between, this crop demands some attention. Should we be celebrating or boycotting?