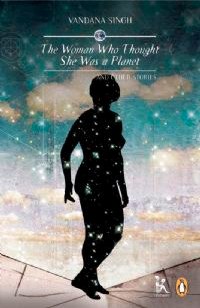 New review: The Woman Who Thought She Was a Planet

“I have said earlier that speculative fiction is about what cannot ever be, or what cannot be as yet. But it is also true that when it uses symbol and metaphor in certain ways, speculative fiction is about us as we are, right now. This may be the case even if the story is set on another planet, in another age and the protagonist is an alien. Because haven’t we all felt alien at some time or another, set apart from the norm due to caste and class, religion and creed, gender and sexual orientation?”

So says Vandana Singh, in ‘A speculative manifesto’, an essay included at the end of her latest collection of science fiction short stories, The Woman Who Thought She Was a Planet.

Feminist authors have always embraced the potential in the genres of science fiction and fantasy to write out the problems they see in the world, and to construct imaginary alternatives.

And yet, notwithstanding writers such as Octavia Butler or Ursula Le Guin, it’s astonishing how many authors in these genres can imagine their characters thousands of years into the future, on alternative worlds, travelling through time and space – but writing a story which revolves around anyone but a white man is too much of a leap. Mainstream sci-fi writers are all too often engaged, as Singh puts it, in writing “Westerns and the White Man’s Burden in Outer Space”.

In this collection, Singh doesn’t go in for constructing grand, feminist utopias or patriarchal dystopias, nor does she labouriously spell out a political commentary. But she does put women – specifically the experience of Indian women – at the centre of most of her stories. And, interestingly, she is unafraid to use the most abstract mathematical fantasies to reflect on, say, a young girl who feels pressured into getting married.