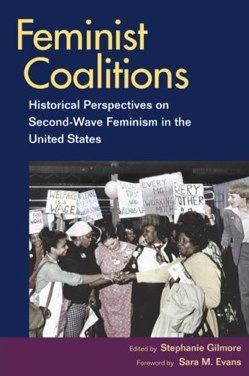 On the herstory of feminist coalitions

In contemporary feminist circles – particularly amongst feminist academics, but increasingly amongst grassroots activists too – it’s become commonplace to cast second-wave feminism as a movement dominated by white and middle-class women who marginalised at best, and ignored and excluded at worst, the different concerns and experiences of women of colour, poor women and lesbians.

The reason this is reiterated so much is simple; for there to be any chance of a full women’s liberation, we, the feminists of today, need to work harder than our second-wave sisters did at acknowledging the differences between us and tackling all those oppressions – racism, capitalism, imperialism, as well as sexism – that coalesce to keep women down the world over.

However, in continuing to shelve second-wave feminism under ‘white and middle class’, we may be in danger ourselves of ignoring the important role women from many different backgrounds played in the fight for women’s liberation throughout the 1960s, ’70s and ’80s.

This is why Feminist Coalitions: Historical Perspectives on Second-Wave Feminism in the United States is such an important addition to the literature on women’s history, for it expands the dominant narrative of second-wave feminism to include the voices and struggles of working-class women and women of colour.

As editor Stephanie Gilmore explains in the introduction: “Long a part of the theoretical discourse of feminism, intersectionality has not been fully integrated into our historical analyses of people’s social movement action.” The white and middle-class amongst us tend not to acknowledge how the activism of women involved in the other social movements of the ’60s and ’70s, such as black freedom and the New Left sometimes overlapped with the predominantly white, middle-class women’s movement.

For poor women of colour in particular, ‘intersectionality’ wasn’t something to be tacked on to the main analysis; it was an integral part of it

Feminist Coalitions begins to rectify this. Each of the book’s chapters focuses on a particular coalition formed between women activists, and explores their efforts at coming together and working across their differences, whether they were ones of politics or identity or both.

Examples of coalitions are drawn from the work of mainstream feminist institutions such as the National Organization of Women and Ms. Magazine, as well as those at the grassroots such as the National Congress of Neighbourhood Women, a multi-racial working-class women’s group based in Brooklyn, in addition to those that didn’t particularly identify as feminist but nonetheless stood up for women’s rights, such as Church Women United and Women Strike for Peace.

Together, they create a compelling and engaging account of how women activists during the years of second-wave feminism did acknowledge and seek to tackle the many oppressions they faced by working together across their differences.

Claims that second-wave feminism focused on the concerns of white, middle-class women to the exclusion of all others are challenged throughout the book’s chapters. Emily Zuckerman shines a light on that bastion of white, middle-class, reformist feminism – NOW – when she describes its Chicago branch as being largely made up of working-class women who joined with local women’s labour groups to play a foundational role in the campaign for working women’s rights.

Different facets to another predominantly white, middle-class group – Women Strike for Peace – are also discussed. In Andrea Estepa’s chapter on the group, she points out that, though largely made up of white, middle-class housewives who opposed the international wars that took their sons away from them, they eventually broadened their agenda to consider the violence which took place on their own shores, and its links to wider racial and economic inequalities, and formed coalitions with poor women of colour to address them.

In her account of the anti-rape movement of the ’70s, Maria Bevacqua aims to “correct a historical record that […] erases the presence of women of color in feminist activism” by affording attention to the black feminists, such as Loretta Ross, who played a prominent and influential role in the movement.

Then there’s Anne Valk’s chapter on the coalition that was forged in Washington D.C. between radical feminists and welfare rights activists to campaign for women’s access to abortion. It is the book’s clearest example of how a coalition worked in practice around a single issue, which can aid activist readers to envision how to go about their own coalitional work.

Particular emphasis is given in the book to the cross-class and multi-racial coalitions that emerged to campaign around employment rights, welfare and housing. There are chapters on the multi-racial National Welfare Rights Organisation and Marisa Chappell’s ‘Demanding a New Family Wage’ locates the broad range of groups that worked together for women’s full employment rights.

However, working in coalition wasn’t without difficulty, and Feminist Coalitions does not romanticise the attempts at coalition-building made by these women. While it is important to acknowledge the activism that women from all backgrounds were involved in, that’s not to say tensions between middle- and working-class, white and black, women did not exist.

Hopefully, Feminist Coalitions is just the first in a line of books that will strengthen and broaden our knowledge and understanding of this herstory

Dealing with racial differences in particular was not easy. Despite their similarly poor economic positions, Premilla Nadasen says that racial tension was present amongst the members of NWRO, with black activists arguing that white welfare recipients still benefited from white privilege, a view which became more pervasive as the black freedom movement grew.

In addition, Chappell describes the conflicting priorities between middle-class and working-class women that were present in the full-employment campaign. She notes that middle-class women were intent on breaking the glass ceiling and securing the top jobs, while women such as, “Ruby Duncan, an African American AFDC recipient, mother of seven, and welfare rights activist and community organizer… reiterated the welfare rights movement’s emphasis on a ‘right to live’ and on the value of poor women’s mothering when she demanded adequate grants to ‘compensate women who work in the home raising children’.”

The benefits of building coalitions

But those women that did recognise and deal with the tensions wrought by their differences found their coalitions endured as a result. Wendy Kline’s chapter, ‘The Making of Our Bodies, Ourselves’, explores the challenges posed by women of colour and lesbians to the women’s health publication for not paying sufficient attention to their particular concerns; but Kline argues that the Boston Women’s Health Collective’s attempts to take on board those criticisms contributed to the publication’s longevity.

Similarly, in her chapter on the NCNW, Tamar Carroll notes that, “Rather than allowing differences among them to fracture their coalition, the NCNW implemented intersectionality through its practice of guided consciousness raising” which resulted in “concrete improvements in their communities as well as greater opportunities for participants in the college and training programs”.

By including groups such as NCNW in the herstory of feminist movements, we can see that practical intersectional approaches to activism were taking place before ‘intersectionality’ became an academic buzzword. For poor women of colour in particular, ‘intersectionality’ wasn’t something to be tacked on to the main analysis; it was an integral part of it, such as their lives were affected by a number of interlocking systems of oppression. It’s this kind of insight that Feminist Coalitions offers, which makes it a more useful tome for contemporary feminist activists than the less practically-informed charges of ‘universality’ made about the second wave by postmodern feminist academics in their calls for more intersectional feminisms.

The inclusion of research from archival materials and the voices of women activists from oral history interviews gathered in the book makes for a more enjoyable and accessible read, but also allows lesser-known women activists, many of them women of colour and working class, to be heard and to take their place in herstory.

Though, it should be noted that many of these women did not identify themselves or their work as ‘feminist’ per se, something Gilmore notes in the introduction: “They may not have operated in the name of feminism; indeed many were uncomfortable with the label… However, they did the work of feminism, whether they embraced or eschewed the label.” Nonetheless, this does throw up the question of whether Feminist Coalitions is right to appropriate these women’s activism by labelling it part of second-wave feminism. Feminist Coalitions then leads us to question what counts as ‘feminism’ and what place activism that didn’t identify as feminist, though it helped to advance women’s liberation, should have in accounts of feminist and women’s herstory.

Feminist Coalitions makes an important contribution to our understanding of herstory and the attempts women have made at working across their differences in the past, although the book’s emphasis on coalitions across race and class at the expense of those that may have existed along other lines, such as sexuality and dis/ability, not only in the US, but also here in the UK and internationally, means there’s potentially a lot more to be discovered about second-wave feminism and the work of women in other movements during this time. Hopefully, Feminist Coalitions is just the first in a line of books that will strengthen and broaden our knowledge and understanding of this herstory.

Such books can also help us to envision and forge on with our own coalition-building in the present; the issues tackled by the women activists in Feminist Coalitions – rape, the right to a decent wage and standard of living, abortion – are still with us today and, as the book shows, in trying to tackle them we’d benefit from acknowledging, celebrating and working across our differences, whether black, rich, white, trans, straight, cis, poor, queer, none of the above, all of the above, or somewhere in between. It won’t be easy – as the examples in Feminist Coalitions show – but then something worth doing rarely is.