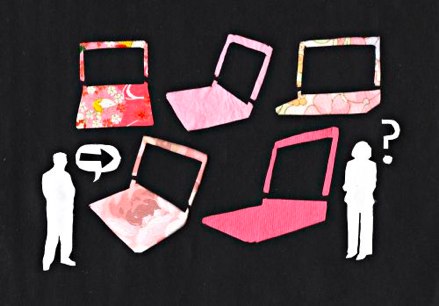 I’m in the market to buy a laptop. I’m a writer and (recently) a mature student and when I need a new laptop, I tend to act fast and act decisively. I’m not a computer scientist, I admit, but I do have a basic idea of what’s going on inside the little silver box. I don’t ask much from my laptop except that it allows me to write and email in peace, and if it can do these things without trying to say too much about my personality in the process, so much the better.

Apparently this isn’t the attitude expected of the average female consumer, at least not those who visit my local computer store. A lone woman, assumed to be hideously out of her depth in an electronics environment, I was quickly assisted by Paul, our helpful, sales-assistant sexist, who put me off balance with his first enquiry, along the lines of: “So you’re after a laptop, are you, one for the home?” Not my office, of course, or to take on business trips, or in fact for any kind of gainful employment which involves travel. I decided not to point out to Paul that if I needed a computer for the house I’d opt for a PC and let him off this first mistake in the hope that it was merely a figure of speech.

“You’ll want something lightweight,” he suggested, and I could hardly disagree, as lugging a back-breakingly heavy laptop around is a pastime best left, well, in the past. But when his eyes lit up suddenly and he beckoned me over to a corner of the warehouse that was glistening pink, I knew that Paul and I had very different ideas about my requirements.

For I had been escorted to the section of the store fitted to sell “laptops for girls”. Apart from the fact that I appeared as I am, a woman in her 30s, dressed demurely in monochrome and exhibiting no ostentatious fetish for the colour pink, Paul’s obvious glee in showing me this cornucopia of cerise made clear that he was utterly delighted with himself for having made such an accurate estimate of a customer’s character. I haven’t been so annoyed since a Gap shop assistant warned me away from the jeans that weren’t made from a figure-hugging stretchy fabric, as if I would be mortified to realised I was looking at men’s trousers.

The blatant gendering of the products on offer before me then, and later when I checked online is as embarrassing as it is offensive. The Asus Floral Blossom laptop, for example, emits the odour of cherries (“the most attractive laptop for ladies!” the website gushes) and the HiGrade Core Duo T2330 comes in a shocking pink leopard print guaranteed to “wow” even the most impassive of laptop users. Aside from being pink, most of them boast minuscule memory, a laboriously slow processor, a postage stamp of a screen and the ability to multitask without significant hard drive support to make any of the tasks particularly challenging or purposeful. Other laptops on offer in the shop came in a range of colours, all at an extra cost on the default silver, but they had chosen only to display those in the pink option. Obviously their intended female audience is assumed to have no imagination.

Now, I had thought market research was a complex activity, involving analysis of income, cultural influences, location and other demographic indicators. I’m highly suspicious of any system that tries to pigeonhole individuals according to such superficial criteria. However, I do hope that someone has let its practitioners know that they can safely confine their research to only one half of consumers: women, it seems, will buy anything as long as it’s pink.

Far be it from me to want to limit choice in the market – if women or men want pink laptops, they have every right and a multitude of opportunities to obtain one. I merely resent being ushered towards a neat little female box, simply because manufacturers have explored the market and decided that the lowest common denominator in terms of women is a colour that, for various reasons, has come to be associated with childishness, benign sexuality and unthreatening femininity. I heartily support any feminist or queer incentive to reclaim pinkness and alter these idiotic assumptions, but not when they’re thrown at me by a capitalist corporation barely able mask their excitement in perpetuating patriarchal stereotypes in the name of ‘celebrating individuality’.

Far from being a means of expressing one’s unique self, pink laptops, iPods, sites like girlspinklaptops.com and pinklaptops.org.uk leave little to be imagined in terms of content, although the latter has some interesting links to research from Newcastle University and New Scientist as to why “girls like pink”, which demonstrates their willingness to engage with advances in gender studies, albeit in a rather limited way. I am particularly troubled by both their science and their grammar:

As for the pinkish preference, it is pretty well accepted idea that men were traditionally the hunters and women were the gatherers. The affinity with the colour red can be thus explained by the theory that in order to distinguish between ripe and non-ripe fruit such as berries then women developed an innate preference for reddish tones.

I’m not a scientist, so I’ll leave such speculation to the experts. It doesn’t take a specialist, however, to notice how manufacturers take advantage of these differences in taste. Claiming that they are ‘inherent’ rather than culturally-conditioned seems to be little more than an attempt by these companies to renounce responsibility for perpetuating unhelpful sexual stereotypes. Lousie Livesey and Jess McCabe at The F-Word have shared their own scathing critiques of this kind of bad science and the limited surveys used to collect it, and I can only second their major contention that the researchers make the mistake of confusing effect with causation – that is, they prove the women they test prefer pink and they decide that this explains why young girls seek out pink objects, rather than those of another colour. What they don’t mention is that the women they surveyed were no doubt exposed to a plethora of pink objects during their infantile years, coded as “for girls”, making it inevitable that some of them will grow up to associate pink with that sense of security and ‘oceanic bliss’ that Lacanians are always going on about. The downfall of this research is its inability to cope with qualitative as opposed to quantative data – they have the figures to prove a thing occurs, but no sensitivity to social influences and symbols that effect the way people interact with their world. My first bedroom had a brown carpet. I grew up obsessed with dinosaurs and the colour green. Perhaps evolution didn’t ‘work’ on me?

Over at The Straight Dope, Cecil Adams provides some excellent myth-debunking evidence for the changing role of colours in infantile development.

As a graduate, I took my first proper job in the children’s department of a publisher. It shocked me at the time that a book aimed at girls of any age-group was not allowed to leave production without a cover coloured pink or purple. Sales figures proved that girls would not purchase a product if they weren’t absolutely sure it was “meant for them”. Colour was how we ensured they knew this.

Sometimes, as a reluctant female consumer, I feel I’m treated as little more than a socket for a range of plug-in electricals, be they hair straighteners, face rejuvenators or epilators. The nuclear-pink Barbie curling tongs produced by Mattel help to bridge that awkward gap between childhood and adulthood. Products like these exist so women can alter their appearances in accordance with an ideal of female beauty. They are circular, self-orientated and concerned with the exterior. A laptop, instead, helps people to express themselves, either through writing or communicating online. Personally, I’d like to keep my laptop as an instrument of my imagination rather than a physical manifestation of my character. It should be neutral, sexless, a machine that people can use in infinite ways to better define themselves on their own terms, without being reminded of how society perceives them and how they’ve been told they should orientate their tastes.

Posie is a young feminist writer living in north London. She has dedicated her life to getting women back in the history books and thinks it is important for feminists to constantly re-examine the past in order to trace continuities where there were none before. It hasn’t been easy: merlot fuelled nights, ink stained hands, sex, prescription drugs and the power of words to change the world, forever! She also has a cat called Emmeline Pankhurst and is the author of Femifesto