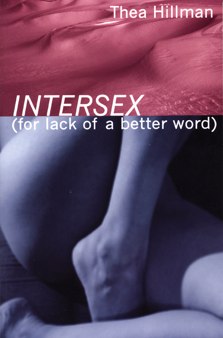 Intersex (For Lack of a Better Word)

Intersex (For Lack of a Better Word) by Thea Hillman is, my housemate told me, “the type of book that is good to have in the toilet”. By this he didn’t mean that the quality of the book was poor, but rather that its structure of short pieces that run to nine pages at most makes it the perfect length for the type of considered meditations one requires from bathroom reading. Needless to say, I gobbled up most of the book on a bus (it’s not everyday that you get to read the gory memoir of a queer intersex Jewish sex radical with a penchant for S/M and performance poetry), but I am inclined to agree with him on this rather shrewd observation.

Thea Hillman’s perzine (personal zine) come memoir is a contribution to an increasing body of popular cultural knowledge about intersex people and experiences (Lucía Puenzo’s critically acclaimed 2007 film, XXY, is a must see, for example). What comes across in Hillman’s book is the massive diversity of experiences of intersex people, who are often subject to surgical or medical intervention. A critical attitude towards the ‘normal’ is offered throughout the book. Thea states: “I realise, as I often do, that I don’t know why I take my medication… I tell people the medication helps me to normalise my levels. I don’t know what that means. What I am trying to become? A normal what?”

Intersex guides us through the early days of Thea’s diagnosis with congenital adrenal hyperplasia, to her engagement with intersex activism through the Intersex Society of North America, her many wild sex-club exploits, and her participation in queer communities and performance. The book is delivered with compassionate insight, humour, desire and care in a non-linear, episodic manner, interweaving class analysis and S/M play, which makes for a lively and engaging reading experience.

There is still no visible grassroots political movement in the UK working around these issues, and most of the resources that are available tend to be North American

The reader is offered an opportunity to engage with the emotions people with intersex experiences have to negotiate, as their bodies are subject to continual medical monitoring and interference from an early age. When Thea develops pubic hair early (at between the ages of five and six), this makes her mother worried and she is taken to the doctor. She explains how they were told: “Since it was detected so early, there is a chance to get me back on track. With close supervision and monitoring of my hormone levels through regular blood tests, they can try to stave off puberty.” Thea’s diagnoses of CAH is not “full-blown” so she is likely to have “milder effects”; it also meant that it was “harder to detect”. In the book, Thea embraces the knowledge of her condition affirmatively, seeing it as evidence of her uniqueness: “She tells me that I won’t have more pubic hair than anyone else, just that I got mine earlier. I love the idea that I have something other kids don’t. I decide this makes me special.” However, later in the book, she identifies similarities between sexual abuse survivors and intersex people, due to the non-consensual, bodily violation they experience.

While Thea was diagnosised with CAH early on in her life, she contrasts her experience with other people who found out about being intersex later on. The first time Thea hears the term intersex is after an encounter with her friend on the street who says: “I have Klinefelter’s Syndrome… My chromosomes are XXY, but I didn’t know about my condition until my ’30s. It’s also why I am so tall. My body doesn’t make enough testosterone.” This again underscores the many different forms that an intersex condition can take.

Thea’s at times voracious desire for sex are counterpoised with some of her fellow intersex activists who cannot reach orgasm, like Natalie, who was the object of her lustful intentions the first time she attends an ISNA conference. Natalie is not able to orgasm because of the surgery she had when she was younger that sought to ‘normalise’ her anatomy. So-called corrective surgery is a continuing, non-consensual practise that takes place on up to five children born in the US every day (statistics are not so widely available in the UK); although one in 2,000 babies are said to be born with an intersex condition, or a disorder of sexual development as they are now also known. Thea sees Natalia as embodying “the intersex experience for me, and my mind wrestles with her as a way of figuring out my own relationship to intersex”. Thea’s own intersex condition is also not typical, since she did not undergo medical intervention as a baby: “I have normal looking genitals. They might have looked strange when, at four-years-old, they spouted pubic hair, but now there’s no way to tell by looking at me, even unclothed, that I’m intersex. Does that mean I’m not intersex?”

Cheryl Case, the chair of the ISNA was once thanked for informing surgeons of the importance of the clitoris for women’s sexual function

It is exciting to read Thea’s personal engagement with intersex activism in the US, where a significant mobilisation took place from October 26, 1996 onwards, when intersex activists from the ISNA (carrying the sign “Hermaphrodites With Attitude”), alongside allies from Transsexual Menace, held the first public intersex demonstration in Boston at a paediatrics conference. In the UK, the issue is still rarely discussed, even within radical queer communities. Last July, I was involved in a gender and sex diversity learning exchange, organised by the Feminist Activist Forum. The day put intersex issues – such as medical intervention and the need to create a culture that values autonomy over the body – at the forefront of a feminist political agenda. There is still no visible grassroots political movement in the UK working around these issues, and most of the resources that are available tend to be North American (and increasingly outdated as the intersex activist movement has fragmented as a result of disagreements about using terms such as disorders of sexual development instead of intersex). I would welcome a feminist movement that made the links between intersex activism and feminism, and this book could be a good starting point.

The book is also significant for its articulation of a particular queered intersex experience – and Thea Hillman is indeed is a right old queer fish (just because you are intersex it doesn’t mean you are queer of course). Politically, this is important because it provides a number of connections between positions, which ultimately proclaim the importance for people to have a body that is able to define itself in whatever way it wants – free from non-consensual, medical intervention – as well as other societal expectations. Her text can simultaneously challenge cissexual presumptions (“testosterone isn’t a male hormone; it’s just a hormone” that any body can naturally contain) while offering cautionary words about the use of hormones and surgery within trans communities. She does this by contrasting the different relationships between the medical establishment and surgery that transgendered and intersex people have.

While hormonal and medical intervention are, more often than not, forced upon intersex people (Cheryl Case, the chair of the ISNA was once thanked for informing surgeons of the importance of the clitoris for women’s sexual function), these are often seen – but not always, by any means – as the key to transgendered people gaining the body that they want. As Thea passionately points out: “I hate that surgeons touch the bodies of my lovers… I hate that I can’t give my lovers the body they want or even the gender they want, that my love of their body, our sex, our queerness doesn’t enable them to recognise it.” Hillman is not denouncing trans people for willingly taking hormones or having surgery (nor is she saying they are misguided), but there seems to be no easy answer to the question of bodily acceptance in a gender and sex restrictive society. I found Thea’s desire to broach these subjects without offering easy solutions a brave thing to do: “Our community is in transition. And, like our therapists tell us, it’s important to be gentle with yourself during a transition.”

Before all the radical feminists reading this throw their hands up and say “that ain’t my community you’re talking about there”, I will leave you with Thea’s vision of queer, intersex feminism. It’s a piece she was commissioned to write for the Vagina Monologues. I have to say I’m right behind her on this one:

When I dream of a world without violence against women, I see four women walking down the street holding hands. Three are wearing skirts. Under the first skirt is the vagina you’ve heard about all night. Under another skirt are genitals that would be called intersex, free of surgery, able to experience sexual pleasure. Under the third skirt there are what’s considered to be male genitals, or the place where male genitals used to be. The fourth isn’t wearing a skirt at all – she’s wearing baggy shorts with boxers at the top. All four women are smiling. All of them are free.

debi withers is going on tour with her band, drunk granny to promote the release of our split 7″ with husbands in February. Maybe we are coming to a town near you. Check out dates and say hello at www.myspace.com/drunkgranny