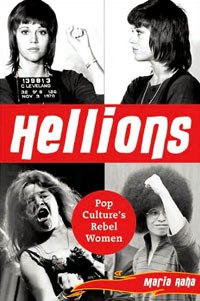 What does a rebel look like? What constitutes rebellion? Mainstream Western pop culture designates it male; it’s him sticking it to The Man with a rugged, surly independence. And because it’s embodied in the white man, his rebellion is revered.

Not so for rebel women. Our rebellion is punished and discouraged, made invisible and deemed unnatural. Our protests against The Man are labelled ‘shrill’, our independence read as selfishness, as failure to comply with the feminine nurturing norm. We’re best off when secondary to the rebel boy – his sex object, the damsel in distress he saves, the stable and self-sacrificing homemaker who gives him refuge when he tires of his wild, wandering ways.

Raha points out how deeply gendered our notions of rebellion are, and sets out a convincing case for the dominant, and most lauded, representation, the ‘loner rebel male’, to be wrested away and re-defined to acknowledge women’s rebellion against white patriarchal society’s expectations of them.

She excavates the annals of pop culture to provide us with diverse examples of rebel women from film, television, music, politics and literature, dismantling patriarchal pop culture’s treatment of them, and reinstating them as icons and inspiration that can fuel further female rebellion.

Angela Davis, Katherine Hepburn, Alice Walker, Hillary Clinton and Yoko Ono, have been mocked and censored for acting and speaking out against white patriarchal society’s sexist and racist mores

Eloquently written and upbeat in tone, Hellions begins with a much-needed feminist critique of the canonisation of male rebel icons such as James Dean and Marlon Brando. Raha argues that these loner white males’ rebellion isn’t really rebellion at all because their status as white men means: “They don’t have to risk as much to be defiant. White male rebellion can be accepted as openly and enthusiastically as it is, precisely because it upholds the current power structure.”

In contrast, women’s rebellion is dismissed or deemed too dangerous, and, in the chapters that follow, Raha explores how pop culture has mocked, punished, disparaged and sexualised a multitude of rebel women in order to stem the vital flow of female rebellion.

In the chapter, ‘Crime and Punishment’, she notes how the talents of writers Virginia Woolf and Sylvia Plath, and musicians Billie Holiday and Janis Joplin, are continually overshadowed by the media’s focus on their depressions, confrontational stances and premature deaths, sending the message that a woman’s questioning and bucking of society’s expectations will contribute to her downfall.

Then, in ‘The Taming of the Shrew’, Raha outlines how women from both pop culture and politics, including Angela Davis, Katherine Hepburn, Alice Walker, Hillary Clinton and Yoko Ono, have been mocked and censored for acting and speaking out against white patriarchal society’s sexist and racist mores and, in the case of the latter two, refusing to play the role of the silent wife beside their seemingly more progressive-minded husbands.

Women have only been welcomed into the pop culture canon alongside their male rebel counterparts as the sex objects of those men. In ‘Cherry Bombs’ Raha discusses this via the examples of Marilyn Monroe and Bettie Page.

Marilyn Monroe and Bettie Page divorced from their husbands at a time when expectations to live out the white, middle-class dream of suburban domestic bliss pressed down on women. This shows that fleeing the domestic nest is also not the preserve of rebel boys

More positive treatment of rebel women is found in their fictional portrayals as super-heroines in action and sci-fi media. ‘Angels, Aliens and Ass Kicking’ explores this terrain, with Raha holding up the relatively non-sexualised and down-to-earth Buffy the Vampire Slayer as a main example. Gender stereotypes still get in the way though; the characters played by actress Pam Grier in blaxploitation films, while autonomous and strong in fighting racial and sexual injustice, were still objectified for the male viewer’s gaze.

The threads holding together the discussion of these varied examples of rebel women in each chapter do feel a little strained at times. At one point, we go from reading about ’30s film icon Mae West to women in contemporary hip-hop, and, at another, the campaigning of real life suffragists to the fictional Wonder Woman, disrupting the flow of the otherwise eloquent writing.

However, what remains consistent throughout is Raha’s discussion of how these rebel women challenge(d) the white patriarchal definition of rebellion.

For instance, she explains how Eleanor Roosevelt went from being a “shy and retiring wife and mother” to “the most prominent progressive female voice of the ’30s”, proving that rebellion is not the preserve of (male) youth, but something that can emerge in people over time. She also points out Marilyn Monroe and Bettie Page’s divorces from their husbands at a time when expectations to live out the white, middle-class dream of suburban domestic bliss pressed down on women. This not only adds a couple more layers to these women’s one-dimensional sex symbol statuses, but also shows that fleeing the domestic nest is also not the preserve of rebel boys.

The main strength of Raha’s argument here, though, lies in her understanding of rebellion as something that doesn’t just reside with the individual (as per the male rebel icons), but as something at its most potent and subversive when it involves a collective questioning of, and acting out against, the oppressive and discriminatory attitudes and structures of society in order to drive social change.

This is highlighted in ‘The Political Gets Personal’ where she looks at how the suffrage and feminist movements, and the activism of the women involved in them, for example Susan B. Anthony, have been disparaged and condemned by the mainstream media, yet concludes: “Women’s political movements make the archetypal loner male seem hardly a rebel at all.”

The final chapter, ‘Uneasy Riders’, is a survey of the contemporary media landscape. Raha deems it still has a way to go before it can claim to represent authentic and unabashed female rebellion. More progressive images of women have emerged – for instance, television programmes such as Sex and the City and The L-Word have given legitimacy to the still marginal idea that women’s primary relationships can be with each other and not men – but they are still clothed in the distinctly conservative cloak of consumerism, pushing forward feminine beauty norms and a materialist ethos.

We each have our own voices, and those that aren’t the loudest aren’t always the least assured

But Raha holds most of her disdain for the media’s current fixation with women who play out a caricature of the vacuous feminine stereotype, for instance Paris Hilton, or with those battling addictions and experiencing mental breakdowns, such as Amy Winehouse and Britney Spears. While this critique does come uncomfortably close at times to attacking these women themselves, rather than the nature of the attention afforded them by mass media, Raha’s point is pertinent. Such narrow and negative images of women currently abound; pictures of women’s overtly (hetero)sexualised bodies are pervasive, and the media’s fascination with female celebrities’ drink and drug habits (habits they would celebrate as ‘cool’ in the male celebrity) get more unsettling lurid.

Therefore, having alternatives to such images becomes more pressing and Raha continually stresses throughout Hellions how important it is for rebel women, those who genuinely buck cultural norms and expectations, to be present and applauded in mainstream pop culture, so that women, particularly young women, have more positive and inspiring role models.

Raha concludes by describing who the genuine rebel woman is – she casts off beauty norms, supports other women and challenges discrimination. Whilst these are all worthy rebel yells, her description of the rebel’s personality is somewhat prescriptive: “Beyond the haze of the computer screen, she is her uncontrived, possibly contentious, honest and shameless self in reality. Her language may be sarcastic and biting, and is always open and delivered with a dash of joy.”

Although it is important to embolden women’s assertiveness and individuality, and question the constraints of femininity which can prevent this, it’s important we don’t end up creating a new ideal for women to live up to, this time one that’s loud and rebellious, which unfortunately Raha comes close to doing here. Just because a woman may choose not to shout with abandon, doesn’t mean she isn’t rebelling. We each have our own voices, and those that aren’t the loudest aren’t always the least assured.

Overall though, Hellions contains an original and engaging argument, one that redefines rebellion and restores women rebels with the respect they deserve. And amidst a culture of faux-sexual rebellion, where women’s political expression and steps outside the feminine boundary are still frowned upon, it’s a timely one too.