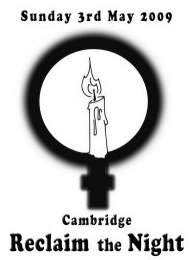 Guest post: Cambridge gets ready to Reclaim the Night

The women of Cambridge are all set to Reclaim the Night this Sunday, 3 May. The march is for self-defined women, and starts at 8:30pm in the middle of Parkers’ Piece, to be followed by a mixed-gender talk, music and vigil, from 9.15 at King’s College Chapel. Here, Natalie Szarek considers some of the reactions to why the march is women-only

“Pretty much everything has already been said,” postulated a friend of mine, as I ruminated over what to write in an article about the Cambridge Reclaim the Night march. I couldn’t help but despair: I felt like a broken record repeating again and again why there was a women-only component to the event, knowing that the same arguments were repeated, on countless online forums and blogs.

Indeed, in the fiery debates which sprung up in the process of organising Cambridge Reclaim the Night, the discussions were characterised by references to innumerable links supporting any side of the argument. It seemed that for every point anyone made, there was a blog to back it up.

“But just because it’s already been said, doesn’t mean it’s not worth saying it yourself,” concluded my friend, and the budding angst which had been building up withered, as I was reminded that the point of Reclaim the Night was not to say something new, but to say what was most important: no to violence against women.

And the more people who join in, the more powerful it is. When the powers that be in our society have utterly and shamefully failed to act on injustice, social movements have been the ones to hold them to account and demand change. Contemporary society focuses its short attention span on each new re-labelled regurgitation of the same old product, forgetting that true change only comes about through long struggles.

These struggles necessarily involve repetition. They involve explaining again and again how violence is gendered: sexual violence doesn’t just ‘happen’ to affect women more than men, it is intrinsically linked to gender. Change comes about because people talk to each other and start to question the orthodoxies of gender hate speech that are propagated by the media and businesses which pull in a tidy profit through exploiting women.

We want a fundamental change in our society – this means that men must be included in the movement to end violence against women, as radical social change cannot happen with only one half of the population.

But we also must recognise the need for autonomous women’s spaces in the movement, because social change must be empowering and acknowledge how inequalities of gender privilege influence groups.

Yet a lesson painfully learned, after trying for months to include lots of men in discussions about men and feminism, is that the best way to interest men in women’s rights is to make something women-only.

I do not regret that there has been such heated discussion over why the first half of Cambridge Reclaim the Night is for self-defining women only – I am glad that these things are being discussed. But I also know that the reason we must maintain women-only elements of Reclaim the Night is not to make these discussion happen, but because these discussions happen when we create women’s spaces.

Although simply repeating the necessity of women-only spaces in confronting gender-based violence will not remove the need for them, we cannot let ourselves become complicit in injustice through our silence. Speaking out is our responsibility, and in fact a privilege. We have our voice and an impressive legacy of women’s activism to draw upon, we take each step knowing that each step is essential, and part of a long path.