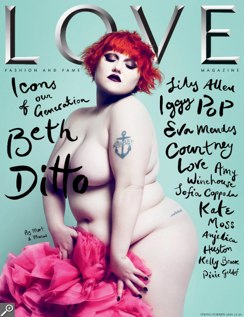 Some body to love

Beth Ditto’s appearance on the cover of the inaugural issue of Love Magazine’s – Condé Nast’s latest trendy publication – has prompted the inevitable deluge of headlines declaring curvy women to be back. But before you swap your South Beach diet for some Southern fried chicken – consider the evidence.

Yes, Kate Winslet looked recently ravishing in all her buxom glory at this year’s Golden Globes. But she did at the 1997 Oscars (just after Titanic came out). And again at the 2004 premier of Eternal Sunshine of the Spotless Mind. All outings dutifully prompted a carousel of headlines asserting the resurgence of the curvier female form. Except that didn’t happen, did it? Just as music publications with predictable regularity run features on a revival of ‘women in rock’, women’s titles have a propensity to occasionally proclaim a revival of female celebrities weighing more than their handbags. They probably think they’re doing us a favour. Similarly to the aforementioned ‘women in rock’ pieces unintentionally suggesting women in rock are a sort of peculiarity, an anomaly, so do ‘curvy celebrity’ headlines relegate heavier celebs to the status of something quite absurd. Almost as patronising as being told “men prefer a bit of something to grab hold of”. (Do they really?! I must EAT.)

Mimi Spencer’s recent feature in The Guardian, headlined “The end of thin”, wrote of a “seismic shift” – in attitudes to the very thin – citing stylist Rachel Zoe’s evangelicals (LiLo, the Olsen twins, Nicole Ritchie) as looking curiously outdated. Consequently, Mimi argues the obsession with thin has reached its apex and it is time we re-embrace our “curvy selves”. But it’s not an obsession with thin. It’s an obsession with bodies. Specifically, female bodies. And articles lauding plus-sized women are every bit as damaging as those which glorify the very thin. Whether positive or negative, it is still part of the incessant accentuation and examination of women’s bodies.

We ‘know’ size 14 women are happier than size 6s. We don’t however know if 6’2″ men are more likely to be body confident whilst their 6’1″ counterparts wake up in the middle of the night crippled by feelings of inadequacy because they had to stand on tiptoes at a Snow Patrol gig.

We know more about Michelle Obama’s arms than we do her Harvard law degree. Her figure is subject to greater scrutiny than how it might feel to be the first black first lady of the US. Because who cares, right, with toned biceps like that?

Female celebrities are asked about how they keep in shape with the tired rigmarole of journalists citing the credit crunch as inspiration for every cultural fad of the past six months. It is simply a matter of course. Off the top of my head I could name the exact weight of at least three US film actresses. If pushed, I could probably name their diet. The female form has been cut up and dissected – literally, dissected. Individual body parts are circled and their virtues or failings highlighted – laid out for public consumption and comment. It needs to stop. We need to shift the focus away from our figures and put an end to the reinforcement of the idea that women are simply their bodies.

Putting on or losing weight is apparently these days some sort of great achievement. It is the way in we have become accustomed to gauging personal success, and it is how women are judged and evaluated against each other. I recently listened in awe as an acquaintance described their recent weight loss as them “bettering” themselves. You need only visit a newsagent to see magazine covers equally resplendent with images of “beach bodies” and “curvy goddesses”, alike. Bafflingly contradictory in their admonishment and praise of nearly every body type. And that’s the magazines catering for women. These days, there is likely to be more female ‘flesh’ in Heat than there is in FHM. We’re objectifying ourselves.

When a woman in the public eye loses weight, as most of the media have it, she’s let the side down. Fallen victim to the vicious pressure of conforming to size zero. When she’s put weight on, well, she’s fat. Adverts sell toning gels and diet pills as if they’re some sort of necessity. Something we might pick up alongside bread at ASDA. A current advert for anti-aging eye cream includes the line “until you seek a more permanent lift”, as if plastic surgery is but the accepted norm. I’m sure we could all find better things to spend our money on.

Did we really put on hold the struggle for equal pay in lieu of struggling to squeeze into our ‘skinny’ jeans? Recently, events took place across the globe for International Women’s Day. One of the events I visited featured a wall on which women could list thoughts which they found empowering. Amongst the many fervent scribblings, one phrase stood alone – “The knowledge that I am more than just my body.” If we could all get to grips with this, it might just be one of the most empowering thoughts for women in the 21st century.