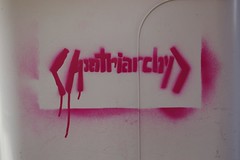 Comments on features & reviews from August are up now for your reading pleasure.

This month, Francine’s explanation of her campaign against Page 3 drew some controversy and comment, along with Amity and Laurie’s reviews of Ellie Levenson’s book, The Noughtie Girl’s Guide to Feminism.

From the archives, look out for an interesting response to Dwysan Edwards’ review of the Will Smith film Pursuit of Happyness.

Massive thanks to Helen G, who coded and compiled August comments, it’s entirely down to her that this month’s comments are out so ‘early’.

Photo by gaelx, shared on Flickr under a Creative Commons license