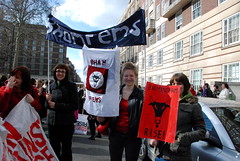 We’ve got a whole series of big marches coming up in the next month or so folks, including Gude Cause on 10 October in Edinburgh, which is a re-enactment of a key Suffragette march, up to the London Reclaim the Night on 21 November.

Well, on 17 October, Birmingham Feminists are to hold their first Reclaim the Night march too!

The march will take us from the top of the city to an area that we feel needs to be ‘reclaimed’ from its reputation as a ‘no go’ area for the women of Birmingham. This event will unite women across the Midlands with women from out of area, to march and take a stand against violence against women, and particularly against the myth that a victim of sexual violence is somehow responsible for their victimisation if they walked home alone at night, or wore revealing clothing, or talked to a man at a bar.

This is a women only march. We define this as any person who self-defines as a woman. We do feel that men are an extremely important part of the movement. However, there is a symbolism to a women only march for Reclaim The Night that separates it from marches for other causes. This is a HUMAN problem, but it is the collective voice of WOMEN that needs to be heard.

The march will be followed by a rally with speakers from the Anawim Project, the Women of Allen’s Croft and Sandwell Rape Crisis among others. This rally is free to enter and is a gender mixed event.

We will then be holding a fund-raising after party in the city centre with proximity to travel options (also mixed).

More info on the Birmingham RTN blog and by emailing [email protected].