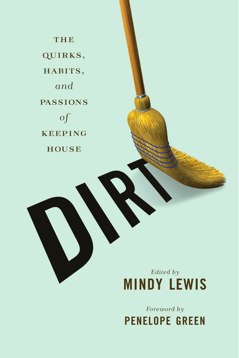 Dirt: Quirks, Habits and Passions of Keeping House is an anthology of women and men writers, journalists and commentators exploring their relationship with all things dusty, cluttered and grimy, as they seek to share and unravel their histories and tales of housework.

Edited by Mindy Lewis, the stories range from the struggle to keep your home immaculate after the birth of a baby, the OCD compulsions that can haunt day-to-day life and, most commonly, the housework habits we have inherited or rejected from our mothers, who, more often than not, taught us how to wield a duster.

As a child whose mother saw fit to hoover every day and clean the skirting boards once a month, Mindy Lewis’s own horror of the sound of the vacuum struck a chord with my own experience of my family’s cleaning habits. And that is what this anthology essentially does, it tells universal stories and experiences, so that you will recognise your own life in at least one of the tales, or be offered a new perspective on situations that may arise in your relationship with your home, your family and your space in the future. In this way, the collection was like sitting in a room with all your best woman friends and telling each other secrets and confessions about their family, their lives and their relationships, all through the medium of housework.

A lot of the most moving tales relate directly to the relationships to those around you, and most particularly the mother-daughter dynamic. Rebecca Walker reflects on how her mother taught her how to keep house, and how her mother’s actions inform her own home-life today, sometimes negatively, sometimes positively. Lisa Solod Warren’s story ‘A Clean, Well Cluttered Place’ describes the difficult process of cleaning out her mother’s house, after her mother’s diagnosis with Alzheimers forces Warren to move her into a home. This is a common theme throughout the collection, how the authors grow to understand and see something new of their parents in this process of “clearing out” after serious illness or death. The seemingly cleanliness-obsessed mother is laid open as her children go through the clutter of life, photos, letters, journals and old clothes, all carefully and tidily stored, waiting to be discovered and her history revealed.

The book on occasions did feel a bit too cosy, ignoring the elephant in the room of the gender imbalance of housework

And, in my favourite piece in the collection, Kyoko Mori talks of the conflict she had with her stepmother over her furious cleaning, after her own mother killed herself. The stepmother cleans obsessively, angrily, furious at being the second, lower-class wife, whilst Mori herself is furious with her stepmother’s behaviour. Another favourite is Alissa Quart’s ode to New York, ‘Dirty Nostalgia’, her exploration of the grimy underworld that New York was to her growing up, compared to its more sanitised and polished image today. It’s startling how much the reader discovers about the writer’s relationships with his or her family through this prism of cleaning and housework, and how much the reader can relate to their own lives.

Despite the interesting and revealing nature of the stories however, I was a little disappointed that there was very little discussion by the writers of the feminist argument around housework. Although there were some moments where the female writer reveals anger that her male partner sees the cleaning as her job, the greater questions and debates weren’t raised. To me this really seemed like a missed opportunity to ask deeper questions about why our mothers were responsible for the cleaning, why we learnt how to keep house from our mothers, and why women these days still carry the overwhelming burden of housework. The essays told us stories of the problems of juggling housework, childcare and jobs, but didn’t go further to say anything about this state of affairs. Because of this the book on occasions did feel a bit too cosy, ignoring the elephant in the room of the gender imbalance of housework.

But I also acknowledge that the book itself did not position itself to address these issues. Dirt was not intended to debate or ask questions, but to allow men and women to share their experiences with the reader, and for the experiences to be reflected back, as the reader recognises the author’s stories in their own lives. The title may tell us the book is about dirt, but more so than this it is a collection of relationships, lives, rooms people have lived and loved in, children and mothers, dogs, cats, lovers and memories.

Sian Norris has been a feminist for as long as she can remember, and is active in the Bristol Feminist Network. She is a freelance journalist, blogger and story writer