How to organise a demonstration 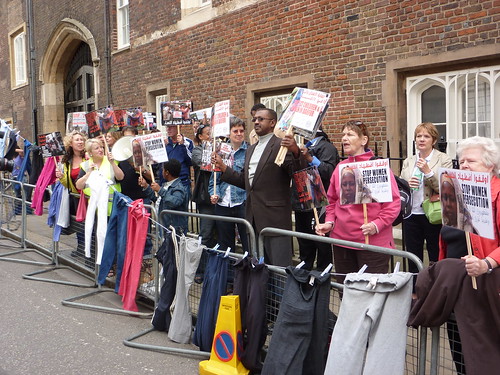 I was listening to the radio one day in early August, and heard an item about how Lubna Hussein, a journalist in Sudan, had been arrested and charged with the crime of wearing trousers. Thousands of women have been whipped for wearing trousers or other infringements of Article 152 of the Sudanese Criminal Code. which says that women displaying “indecent conduct or clothing” can be flogged (up to 40 lashes) and fined.

Individual policemen decide whether a woman’s clothing is ‘indecent’; for example, women have been whipped for having a picnic with a man. Lubna Hussein resigned her post at the UN so that she would not be immune from prosecution and she decided to lead a campaign to eliminate Article 152. Her trial was due to be held on 7 September.

Like so many people who heard her speak on the radio, I was appalled and texted a friend, suggesting we go to the Sudan embassy to protest. I emailed other friends and many wanted to join us. We wanted to show our solidarity with Lubna Hussein and to add our voices to those calling for an end to this barbaric treatment of women. We chose to organise the demo on Friday 4 September at lunchtime – in order to leaflet people on their lunch breaks.

I went to the area of the embassy (near Green Park) to see which spot might have the greatest impact. I spoke to a member of staff at The Ritz, who suggested Trafalgar Square or Parliament Green and wondered about Green Park itself, but in the end we all agreed that the demonstration should be outside the Sudan Embassy, 3 Cleveland Row, SW1 because it was the Sudanese government we needed to influence.

I then emailed people who had organised protests about Darfur outside the Sudan embassy, asking them how to apply for police permission to protest. They told us to find the nearest Metropolitan Police office which was easy by Googling. I phoned the Charing Cross police station and was told to apply for permission to [email protected] giving details such as what, when, where the demo would take place, numbers, main contact, etc. A policeman called a few days later and okayed it all, but wanted to meet to us to discuss logistics. Louise and Nell went to meet him at the site of the protest. They discussed where we should stand, how many stewards (we needed a ratio of 1:50 stewards to protesters; we had 3, Catherine, Nell and Trish), what was allowed, etc. There is a document which helps you organise, with roles and responsibilities and a formal agreement to sign. The police were very helpful.

Meanwhile, we got busy with planning the leaflet to hand out on the day. A friend, Ruth L, works at a printing press which agreed to print 500 two-sided A5 leaflets for free. Various people helped with the wording, for example who we were, why we were protesting and about the background to the campaign & Lubna, with a photo.

I had a contact in Sudan, Ahmed Elzobir, who used to live in London and who I knew through a Darfur campaign. He put me in touch with fellow campaigners for Lubna Husssein in Sudan. I asked them what their aims were and what they suggested our demands should be on the leaflet and who to lobby. The demands (to MPs, the Foreign Minister and the Ambassador) were:

We needed to find two or three good speakers. Ahmed recommended we contact Dr Amal Sidahmed. She agreed to speak and was very helpful on how to publicise the event to the Sudanese community here, how to word the leaflet, and who else to invite as a speaker. She said we must have a speaker from the South of Sudan because of the history of conflict and recent peace. Amal sent contact details for Ajok Wek who chairs Sudanese Women for Equality and Peace (SWEP International), and Ajok agreed to speak. Amal also arranged for our leaflet to be translated into Arabic.

I spoke to a co-ordinator of the Darfur community here and they asked to have a speaker at the demo, but everyone (UK and Sudanese organisers) agreed that we should keep the focus on eliminating Article 152 and Lubna, though we have all been active in our support for Darfur previously. Ideally we wanted a third speaker and asked various people: MPs, journalists, campaigners, sympathetic organisations. It was quite last minute though and we didn’t find a speaker, but asked for and received messages of support from Lynne Featherstone MP, journalist Yasmin Alibhai-Brown, the chair of the Islamic Human Rights Commission and Lubna herself.

We sent out a email two weeks before the event, with all the details and the leaflet attached, to enable people to lobby even if they couldn’t make it to the demo, and asking everyone to forward it to friends and contacts. We told sympathetic organisations, such as Darfur Action, Amnesty International, Human Rights Watch and Crisis Action.

We borrowed one for free from Crisis Action.

We asked our contacts in Sudan what we should chant – in English and in Arabic phonetically), they sent a list which we checked with Amal. The recommended chants were:

Fiko Daribna Wajatw Galibna! (Go away stop bothering us, our hearts are in pain!) People could clap, while shouting this slogan, which sounds very musical and also powerful. 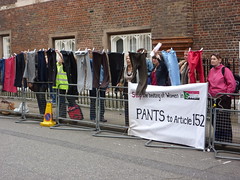 Letter to the embassy

The police got an agreement from the embassy that we would be allowed to go and present a letter to the Ambassador making the above demands.

We asked everyone to wear trousers if possible and we brought extra (multi-coloured) pairs of trousers, pegs and a washing line to hang on the barricade. Ruth S and Trish made a fabulous huge banner saying, “Stop the beating of women in Sudan…Pants to Article 152”. The Sudan Civic Forum brought laminated banners. 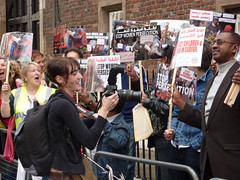 A friend, Ruth S. was our photographer.

We wrote a press release (what, why, where, when, quote, contact) and agreed on who to contact, by email including: local, national & specialist press (women, Muslim, legal, human rights etc.), London TV and radio, BBC, ITV, Channel 4.

We found contacts by Googling or used contacts we already had. The two most supportive journalists were from The Times, which found Carrie’s number on the press release by Googling, via Lubna Hussein’s site. Susie Mesure of the Independent on Sunday had written an article asking why women here were not supporting Lubna Husssein. Susie gave us Lubna’s email address so we could have direct contact with her. And on the morning of the demo Tristan McConnell, The Times’ East Africa correspondent called because he was writing about her trial and wanted to know about our demo and to find Lubna Hussein.

Thanks to him a Times photographer was with us all morning. Channel 4 News sounded seriously interested but did not send cameras on the day. We found the relevant Woman’s Hour contact eventually and emailed her. Happily they were planning to feature Lubna’s case on the day of our protest. A researcher called to speak to Carrie and Susie Mesure was part of the discussion, so we got a good plug.

The demo was great. About 70 people, mixed age, women, men, friends, family, Sudanese community groups and individuals who’d heard the Woman’s Hour plug. It all went to plan: chanting, speakers, messages of support, we took the letter into the embassy. A highlight was when Lubna Hussein called. We hadn’t planned that and Amal translated her words to the crowd. Some embassy staff were annoyed by the demo and yelled at us to address violence against women in the UK, though we were well received in the embassy. Many demonstrators went to hand out leaflets in the area and beyond. 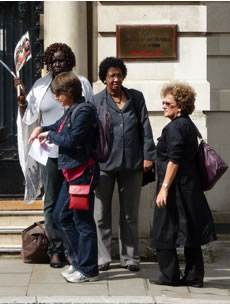 We took contact details from anyone who wanted to be kept in touch. Make sure all emails and phone numbers are written clearly, a significant number collected were hard to read and bounced back which is very frustrating.

Do a write-up and get it on sympathetic websites with pictures (Lubna Hussein’s allies in Sudan asked us to write a report which you can see here). Follow up any press interest (journalists from the Independent on Sunday and the Ham and High asked us to be in touch).

I wrote to Sally Keeble MP who was on the Woman’s Hour programme where they discussed why women in the UK don’t support campaign like Lubna’s more. We asked to meet her the following week and that was useful.

She suggested we contact: trade unions, party conferences, and the All Party group on Sudan. She promised to write to all women Labour MPs, David Miliband’s office and to take a delegation to the Sudan embassy. We followed up with emails to everyone at or supporting the demo, thanking them, with photos and an update about Lubna’s trial, her imprisonment and freedom after the government-backed journalists’ union paid the fine against her will.

A week after our protest, there was a dodgy piece in The Guardian by Khalid al-Mubarak, press counsellor at the Sudan embassy. He was refuting Lubna’s of 4 September and arguing that women’s rights have improved in Sudan. We sent a reply to The Guardian and asked all those who’d come to or supported our demo to do the same. We also sent them this message from Lubna which arrived on the same day:

I would like to thank you for your support and solidarity with me. I am really very happy to get this support, my case is not finished, we will continue against the unjust laws and special courts and police public order. I hope we meet and share tea soon. I prefer to stay at prison for one month, it is good chance to write a book! anyway the government evacuated me out of prison. I have facebook and many people write to me. Give your friends my full name: lubna ahmed hussein, they can write to me over facebook. Thanks and regards. Lubna

We’ll meet Amal and Ajok to discuss what next and have asked everyone to email suggestions. The struggle to eliminate Article 152 goes on.