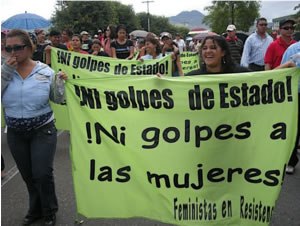 Learn about Feminists in Resistance against coup in Honduras, TONIGHT, London

A bit short notice, but if you’re in London tonight, there’s a great opportunity to learn a bit more about the work of Honduran Feminists in Resistance to the coup going on at the moment.

Katherine Ronderos, women’s rights programme officer for the Central American Women’s Network has just recently returned to the UK from Honduras and is going to be speaking about the situation there:

I would like to invite you to an informal talk this evening at CAWN at 6pm, to share my views about my recent visit to Honduras, the political / military coup situation there, and the work of the Feminists in Resistance against the coup.

You may have heard that during the last 7 days, the violation of human rights increased in Honduras because of the return of President Manuel Zelaya through the Brazilian Embassy. The national curfew of 72 hours caught me whilst there, all airports and borders were closed, and the city was completely militarised. I managed to escape by land to El Salvador and flew from there back to London during the weekend. So I hope to give you the most insight information from this recent experience.

The talk is tonight at 6pm, hosted by CAWN, at:

CAWN has loads of background info on their site about the situation in Honduras and the feminist protests.

But the people of Honduras are continuing to protest against the illegitimate regime despite mounting repression and violation of their human, labour and gender rights. On 11 August the peasants’ movement Via Campesina organized a day of solidarity with the Honduran people. Thousands of marchers arrived in Tegucigalpa and San Pedro Sula, Honduras’ second city, concluding a seven-day peaceful protest march across the whole country. But they paid a high price: lawyers advising the National Front of Resistance to the Coup d’État, the group of NGOs, trade unions and popular organizations formed to oppose the coup, reported that hundreds of people were injured and more than 40 detained as a result of violent incidents that evening. Later that night the Tegucigalpa offices of Via Campesina were fired upon.

Women’s organizations are continuing at the forefront of the protests, with marches, meetings, email and internet bulletins. They are also in the golpistas’ sights. CAWN has already reported on the takeover of the National Institute for Women (INAM), the unfair dismissal of several its staff, and the likely setbacks to women’s sexual reproductive rights. At a demonstration outside the INAM offices on 15 July, five women were assaulted and INAM’s technical director, Kenia Irías, received threats to the safety of her family. Women protesters have also been subjected to sexual aggression and sexist insults by members of the security forces.[3]

Yet the courage and energy of Honduras’s women are undimmed. From 17 to 21 August, feminist and human rights organizations, including Feminists in Resistance, are holding a Week for Women’s Human Rights in Honduras, with international guests from Central America, Mexico and the United States. This event aims to make the struggle of Honduran women more visible internationally. Among its activities will be the seventh in a series of Observatorios de la Trangresión Feminista (translated as ‘Women’s Transformation Watch’, which will gather, document, and subsequently publish testimonies and evidence concerning violations of women’s human rights since the coup.

Feminist organizations in Honduras are clear, however, that the coup has only intensified the existing, systemic violations of women’s rights in their country. That’s why one of their key campaign slogans is:

(No coups d’état, no beating up women!!)