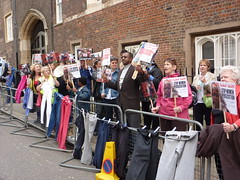 In our last update, we reported that Lubna Hussein was found guilty of indecency and refused to pay the fine, prefering to go to jail for a month to highlight and protest Article 152 in Sudanese law, which unfairly penalises women by restricting how they must dress in public.

Lubna is now freed as her bail was paid – against her will. We received the following message via the London campaign who organised the protest at the Sudanese Embassy last week, shown above.

The news is right and Lubna is not too happy about it. I got the message below after her appearance at a press conference yesterday:

“Lubna in her press conference in (Ajrass Alhurria) newspaper said she is upset from the way her trial went on and the way that Sudanese Journalist Union free her from prison (against her will). After discussing this with her lawyers she is going to appeal the judge’s decision on her case to higher courts, even the constitutional court, to change the law”

I would like to thanks you for your support for me, solidarity with me. I am really very happy to get this support, my case is not finished, we will continue against the unjust laws and special courts and police public order.

To continue to support Lubna check out Lubna’s Facebook page, website, or write to the Sudanese Ambassador in London asking them to repeal Article 152 of the Sudanese Criminal Code, at the following address: