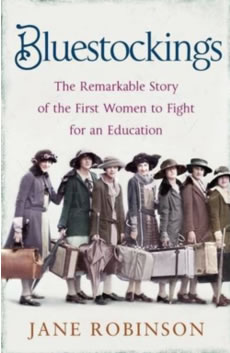 England’s first college accepting female undergraduates was established in 1869. In 1948, Cambridge became the last university in the country to grant degrees to its female students. Alexandra Roumbas Goldstein reviews a book which charts the years in between

Originally uttered in a faintly pejorative tone, a ‘Bluestocking’ was an 18th century literary luminary, an educated, intellectual woman. In Bluestockings – The Remarkable Story of the First Women to Fight for an Education, Jane Robinson reclaims the term and uses it to pull together an extraordinary tale of misogyny, determination, ambition and the quest for knowledge more than a century later.

In 1869, Emily Davis made history by creating a college for the first female undergraduates in England, in a house outside Cambridge. The lecturers were whoever could be persuaded to help out; the five students were not to actually be awarded degrees at the end of their courses. It would take two world wars before Cambridge allowed its female graduates to qualify, becoming the last university in England to do so – although it was the first English university to tolerate female students, after a fashion.

So what happened between 1869 and 1948? Who were the women who pushed the boundaries of education and perceived wisdom about the academic abilities of the ‘weaker’ sex? What was life like for those women at the edges of academia, striving for a world where further education would no longer be a privilege offered only to men? Answers to those questions provide the meat of Robinson’s very readable history.

Through interviewing and corresponding with some 120 of these women, as well as poring over endless letters, diaries, school records, reports and articles of the day, Robinson has created a very vivid and personal picture of life for women in the early 20th century. Individual stories are used to illustrate the kinds of hardships they faced and how they were overcome.